Did You Know? Hubble bubble, hookah, shisha, nargileh, ghalyan, all these words refer today to the well-known smoking devise for heating or vapourising, and then smoking, tobacco. 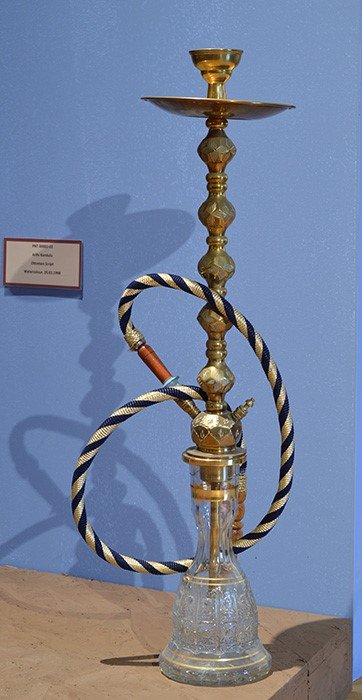 Hubble bubble, hookah, shisha, nargileh, ghalyan, all these words refer today to the well-known smoking devise for heating or vapourising, and then smoking, tobacco. The tobacco can be plain or flavoured with fruit or flower tastes.

It is believed that after the Jesuits monks introduced tobacco to India in the seventeenth century, a Persian physician, Abu’l-Fath Gilani, invented the waterpipe.

Another theory wants the waterpipe to have been invented during the Safavid dynasty of Persia and then spread to India. When the British colonized India they used the word hookah when referring to the smoking contraption. The word nargileh referred to the pipe whereas the word shisha referred to the glass bottle. The use of hookahs in India was a matter of prestige amongst the rich and landed classes. The nargileh arrived in Turkey in the seventeenth century and became an important custom and status symbol as well. In western Turkey nargileh bowls are made from beautiful coloured ceramics.

The nargileh, or hookah consists of the following parts: The bowl, usually a clay container which holds the coal and the tobacco. The bowl is filled with tobacco, covered with a piece of aluminium foil with small holes and on top pieces of coal are placed to heat the tobacco. From the bowl starts a steel pipe which emerges in the water of the bottle. The wind cover sits over the bowl area and prevents wind from increasing the temperature of the coal and stops ashes from flying everywhere. Then the hose, a flexible tube that allows the smoke to be drawn for a distance, cooling down before inhalation. At its top end the hose receives a mouthpiece, usually wooden or plastic, for the user to draw the smoke. A small plate or ashtray below the bowl collects the ashes falling from the coals.