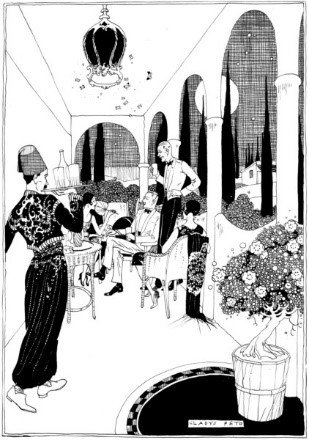 She was an English artist, fashion designer, illustrator and writer of children's books. She studied at the Maidenhead School of Arts in 1908, and London's School of Art in 1911.

She worked for the Sketch and the Tatler magazines. In 1922, she married Dr Cuthbert Lindsay Emmerson of the Royal Army Medical Corps and travelled with him around the Mediterranean. Inspired by her travels she wrote about Malta & Cyprus, and Egypt & the Sojourner. Her books are full of detailed observations and humour while at the same time very atmospheric and inspiring.

Her book Malta and Cyprus is illustrated by her own pen and Chinese ink drawings, presenting scenes from the two countries. Cyprus history comes alive in her text in the most engaging manner. She is of course a member of the colonial power in Cyprus and this fact is willingly or not reflected in her drawings. Gladys Peto presents the British in Cyprus in their club, dressed in their dinner jackets, on a beautifully decorated veranda, with servants serving to them long pink gins. They socialize among themselves, no sign of locals.

The locals? They are presented by Peto in the streets of Nicosia, or Limassol, in the countryside and up in Troodos, always with their animals, the women followed by a number of children, labouring away with their everyday chores.

Her technique is reminiscent, of the Auberon Beardsley style. One could say she is almost a faithful follower. But then of course this was the fashion of the time.

Peto’s descriptions of the Cypriots are unforgettable. Writing about dances at a hotel in Platres “You find a row of whispering peasants – both men and girls – peering through the upper windows of the ballroom. They appear to be enormously intrigued with everything. You may even see a donkey there and I am told that a camel has been known to take a peep at the party. You will certainly see Marikou there, all complete with lamb. It cannot surely be good for the lamb to keep such late hours. The balcony at the end of the room is also occupied by onlookers from the country. Turkish women sit there and peer above the cloak which is pulled across each face.”

Even the titles of her drawings are very representative of her humour and attitudes: She draws an elderly Cypriot woman patting her on the cheek, a gesture very common in Cyprus if one wants to express affection. Gladys writes: “A curious habit of patting you on the cheek which is rather disconcerting”

One can enjoy the Peto drawings on the second floor of the CVAR.