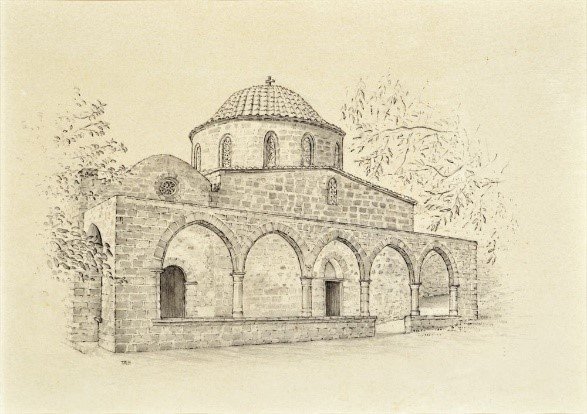 On the hills above the village and near Ayios Ambrosios lie three monasteries of which Antiphonitis is the most important.

During the early 16th century the casale of Antiphonitis belonged to the Lusignan family. In the 1930s it was the property of the monastery of Kykko. Antiphonitis consists of a church of the byzantine plan dedicated to the Virgin Mary decorated with exquisite wall paintings.

The byzantine dome, not a true circle, is supported by eight columns, four detached and four attached to the side walls. At the end of the 15th century a narthex and loggia were added on the south site of the church. The loggia consists of a series of pointed arches in the Gothic architecture of the period. The interior of the church is covered with paintings dating back to the 14th and 15th centuries. Most impressive is the Pantocrator in the dome and the Tree of Jesse on the south wall.

The iconostasis was blue and gold of the seventeenth century and the holy doors were dated 1650. All was looted and the wall paintings removed after 1974 by the Turk Aydin Dikmen. Part of these have been recovered by the Church of Cyprus. The views from the monastery, which is surrounded by almond trees and liquidamber trees, are superb looking down to the sea and across the Taurus Mountain. The name of the church is said to have come from the reply of Christ, the echo of Christ.