Did You Know? The Prayer Rug 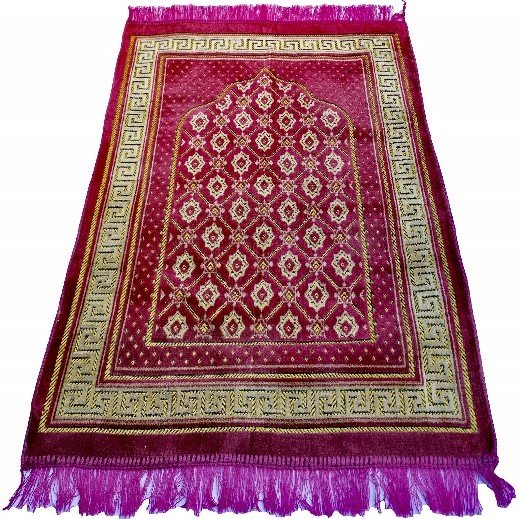 The prayer rug, or mat, is a piece of woven fabric, used by Moslems and Arab Christians during prayer.

The prayer mat is traditionally woven with a rectangular design, typically made asymmetrical by the niche at the head end and is decorated with images. These images may be important Islamic landmarks, such as the Kaaba, but they are never animate objects because animate objects in Islamic tradition are forbidden.

In Islam, the rug is used for cleanliness during the various positions of prayer, during prostration and kneeling on the ground. Ablution precedes prayer, therefore a Moslem must be clean and pray in a clean place. A prayer rug is characterized by a niche at one end, representing the mihrab in every mosque, and directing the faithful towards Mecca. Many rugs also have woven within them one or more mosque lamps, referring to the verse of Light in the Koran.

Prayer rugs are also used by some Arab Christians for prayer. Their purpose is to maintain a cleanly space to pray to God and shoes must be removed when using the prayer rug. These rugs are often blessed by the clergy in a church. Also carpets often cover the floors of parishes in denominations such as the Ethiopian Church, on which Christians prostrate in prayer. In the Middle East and South Asia, where evangelical missionaries are active, converts use prayer rugs for prayer and worship in order to preserve their Eastern cultural context. The Armenian Apostolic Church has a long tradition of prayer rugs with Christian symbols. In today’s Christianity often the prie-dieus replace the prayer rugs.

It is interesting to know that the Lutheran churches, parish storerooms and museums of Transylvania have about four hundred Anatolian rugs, dating from the late-15th to the mid-18th century. They form the richest and best-preserved corpus of prayer-format rugs of Ottoman period outside Turkey.

You can view a prayer rug on the third floor of the CVAR.