Did You Know? The Maltese in Cyprus 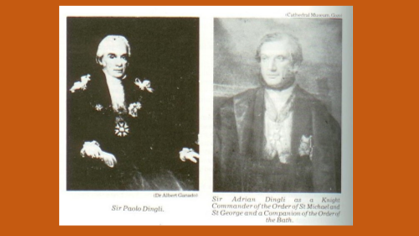 After political domination, colonising the island was the second priority of the British. Within this framework London tried to entice some Maltese to settle in sparsely populated areas of Cyprus to offset the growing importance of the Greek elements on the island.

The Maltese were overpopulating their island and were unemployed. In an extensive memorandum written by Sir Adrian Dingli it was noted that although Cyprus was a relatively large island, its population was not large. The land and climate of both Malta and Cyprus were the same, the Maltese would be loyal subjects and very hard working especially as stone masons whom Cyprus had none. And, most importantly, they would combat the increasing Greek aspirations for union with Greece. Dingli asked for a large area to be given free to the Maltese, with no taxation, and with payment for emigrating, all preparations for their settlement to be borne by the British government down to being given money to buy their own clothes!

Sir Garnet Wolseley, the first High Commissioner of Cyprus upon receiving Sir Adian Dingli’s memorandum hit the roof. “By last post I received a long proposal by Sir Adrian Dingli regarding Maltese emigration. His scheme is simply preposterous. He wants 25 square miles of land for nothing and that no taxes should be charged for ten or twelve years. It is the coolest and most silly project I have ever read over. It is thoroughly Maltese in all its lines, goes in for priests etc. It ought to have emanated from the propaganda at Rome. I shall be expected to write a serious criticism upon it –pure waste of time!” Had this scheme gone through, the Maltese with their large families would have soon become a sizeable percentage of the population and the enmity between the Catholic and Orthodox Church would have been further complicated. However, on 22 December 1878 Wolseley made another note in his diary which leads to the assumption that Maltese did emigrate to Cyprus: “To Kiti with M’Calmont and White. Inspected the site for the Maltese colony and for eucalyptos plantations.”

It seems that private entrepreneurs bought land and brought over a number of settlers to work on it. This went on. By 1880 Maltese entrepreneurs such as Mr Fenech bought even larger chunks of land on Cyprus and engaged some of their country-men to develop it. In the 1881 census of the British Government there were 174 Maltese living in Cyprus. On March 8 1888, Fenech reported his acquisition of 200 acres of land between the villages of Kouklia and Kalopsida with rural buildings and running water, and that he had "commenced their cultivation by means of Maltese colonists”. The Maltese colony of nine families (42 persons) brought by Mr. Fenech under a contract with the British government settled into ordinary peasants' cottages. Another group settled in the area of Orides near the village of Kuklia in Paphos. Over the next few years they suffered from malaria, as well as the inability to withstand "heavy drinking and fruit." However, this initiative was soon defeated by the spread of malaria and other fevers. But some Maltese settlers did persevere and remained here.

In 1925 Cyprus was declared a Crown Colony and two years later a scheme was presented to the Maltese authorities by Lt. Col. Harman Grisewood on similar lines with the Dingli scheme for 2,000 Maltese. The land on which the Maltese were to settle was known as the Margo Estate. Its former owners were Jews who had abandoned it when they had left for Palestine.

In July 1928 three Maltese farmers left for Cyprus. They visited the Margo Estate and the impressions made on the visitors were entirely positive. As a consequence of this visit farmsteads were offered to prospective Maltese colonists on a basis of cash or easy instalments. However, the plan failed again. Why should Maltese go to Cyprus when so many Cypriots were themselves leaving the island for North America and Australia?

A third case of Maltese immigration to Cyprus involved people from Malta living in Greece and Turkey, who, as British subjects were evacuated to Cyprus in 1941 when the Germans advanced through the Balkans. In 1949, a camp was opened at Dekhelia Cyprus, to house some 400 British subjects from India who were unable to return to their homes after the war. They still were labelled "Maltese" and therefore British citizens, because they were of Maltese origins, although none spoke their native language. By December, 1950, 70 of the original 400 had settled in other countries with guaranteed maintenance of employment, and the Cypriot government hoped to relocate the rest. The main concern of the British Government was the expense to keep these people in Cyprus. They were all on the dole, no employment, no work. And what was worse, these people did not want to be relocated. In 1950, about 100 persons left to settle in Australia. Those who remained were encouraged to take up local employment.