Did You Know? The Evil Eye 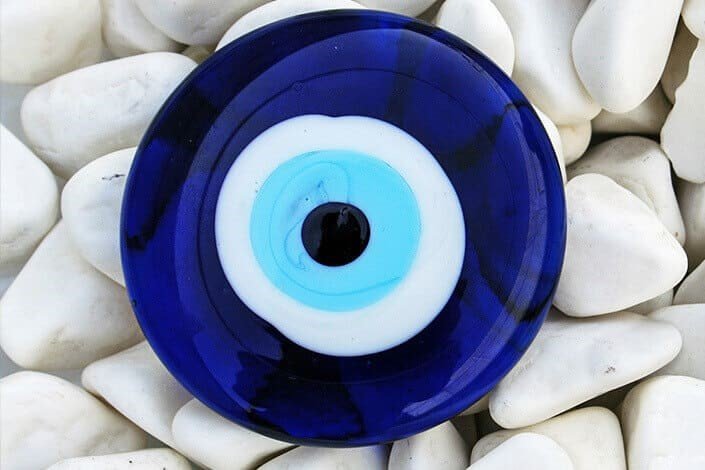 The evil eye is a supernatural belief in curse, brought about by a malevolent glare. It dates back at least to Greek classical antiquity, 6th century BC where it appeared on Chalcidian drinking vessels, known as 'eye-cups', as a type of apotropaic magic. It is found in many cultures in the Mediterranean region. Around 40% of the world's population believe in the evil eye. In the Aegean Region and other areas where light-colored eyes are relatively rare, people with green eyes, and especially blue eyes, are thought to bestow the curse, intentionally or unintentionally. The concept is well captured by Heliodorus of Emesa in the ancient Greek romance Aethiopica, in which he writes, “When any one looks at what is excellent with an envious eye he fills the surrounding atmosphere with a pernicious quality, and transmits his own envenomed exhalations into whatever is nearest to him.”

There is a key distinction between the evil eye, which is a curse and the eye amulet, which dispels the curse. In Turkish the evil eye is called nazar and the apotropaic amulet is called nazar amulet. How far back do these go? “The earliest version of eye amulets goes back to 3,300 BC,” Dr Nese Yildiran, an art history professor at Istanbul’s Bahçeşehir University explains that “The amulets had been excavated in Tell Brak, one of the oldest cities of Mesopotamia – modern day Syria. They were in the form of some abstract alabaster idols made with incised eyes.” In Greece, the evil eye is cast away through the process of xematiasma (ξεμάτιασμα), whereby the "healer" silently recites a secret prayer passed over from an older relative of the opposite sex, usually a grandparent.

Cypriots believe that burning olive leaves is a symbolic act for warding off the evil eye. Once the leaves are smouldering, they are passed around the head of person who wishes to be protected three times whilst saying "may you be protected from bad eyes".

The nazar or evil eye amulet is believed to absorb the negative energy of the evil eye. It is believed that the charm will break when it is full of negative energy, protecting you from it, and it then needs to be replaced. Most Cypriots will hang an evil eye charm outside their front door of their home or business to prevent the evil eye from entering the property. It is also used as a hanging charm in cars, and other places where people gather. And of course they wear the evil eye amulets. Generally, a nazar charm is handmade from glass, and features circles or teardrop shapes in various shades of blue, white, black and sometimes with gold edging.

When you see a Cypriot scratching their bottom whilst talking to someone, it's not that they are being rude, in fact they will scratch their rear-end if they feel any negative energy or if they feel the person they are talking to is giving them the "evil eye".