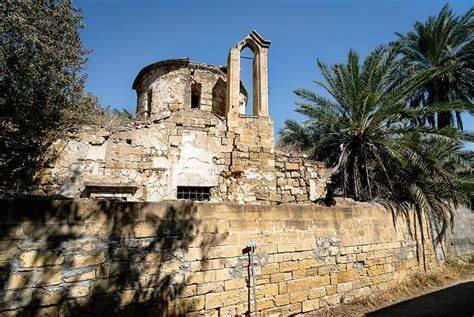 Mas Latrie in Livre Des Remembrance, document 195, (Wednesday, 3 January 1469) mentions "la chapelle de Saint Jaque de la commersarie de Sire Simon de Montolif," for which its procurator, Arnat Mode, received 150 bezants. Therefore, in 1469 a Latin chapel of St James existed in Nicosia but we have no indication as to when it was first built. At the conquest in 1570 the chapel was taken over by the Ottomans, as were all Latin churches, and ended up in the hands of a rich Janissary, who used it as a stable. In 1627-28 a French missionary named Pacifique de Provins bought it; he may have been a Capuchin working with the Latin bishop of Paphos, Pietro Vespa, who wanted to give it to the Capuchins and make it the Latin cathedral.

Later the leader of the Observants in Cyprus, Giovanni Battista da Todi, superior in Larnaca, opposed the plan, but Pietro insisted, and so by 1638 is became Capuchin and the Latin cathedral, because of its central location compared to Santa Croce, which was too far away for the Latin community. Nevertheless, although it had a hospice and it was the cathedral, supposedly, it was modest and had only one priest in 1647. Its wall painting of St James was popular for both Greeks and Turks, who came to cure their children in a ritual Giovanni describes.

By 1661 Giovanni had succeeded Pietro Vespa and saw that San Giacomo, a stone church, was going to fall down and by 1665 he had received permission from the Turks and restored the church, which must have taken on the 17th century appearance. Archimandrite Kyprianos also refers to a church of St James the Persian belonging to the Capuchins fathers in Nicosia (Kyprianos, 1788 (repr. 1975):587).

George Jeffery in A description of the historic monuments of Cyprus describes the church as a small single-nave chapel, surmounted by a dome, without architectural character. This monastery adjoins a ruined property known as the “queen’s house”. Mas Latrie suggests this may have been the chapel of St. Jacques de Commersarie adjoining the house of Sir Simon de Montolif.

Archduke Louis Salvador in Lefkosia, the Capital of Cyprus wrote that Ayios Iacovos is a small building with four barrel vaults; upon these stands a square wall, carrying the cupola with eight little windows. The interior shows four pointed arches; the one on the back is lengthened out. The iconostasis, wood carved, bears the Russian eagle. The apse is a niche with pointed arches.

Rev. J. Hackett in The history of the Orthodox church of Cyprus believes that the chapel of St. Jacques de la Commersarie seems to have been the private property of Sir Simon de Montolif, or to have been erected by him, as it bears his name. It doubtless derived its other title from being situated near one of the octroi-houses (Comerchio) of the town. Its endowment in 1468 is represented to have amounted to ninety bezants.

St James was where the unwanted newborns of Nicosia were deposited, in a box at its steps. The babies were taken in by the monks and looked after/ brought up.