Did You Know? Robert Anning Bell, Catherine Queen of Cyprus 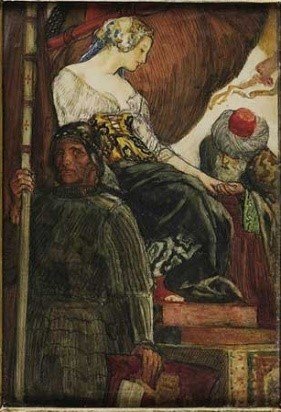 The painting, which hangs in the Caterina Cornaro room on the second floor of the CVAR, is inscribed verso on a label of the Society of English Painters, hand written by the artist Venice: Once did she hold the gorgeous East in fee and was the safeguard of the West. (On the Extinction of the Venetian Republic, by William Wordsworth, 1802). The painting is by chalk and watercolours, dated 1900.

Robert Anning Bell RWS (1862 – 1933) studied at University College School, the Westminster College of Art and the Royal Academy Schools, followed by a time in Paris. From 1895 to 1899 Bell was an instructor at the Liverpool University school of architecture. During this time he became associated with the Della Robbia Pottery in Birkenhead. In 1911 he was appointed chief of the design section at the Glasgow School of Art, and from 1918 to 1924 he was professor of design at the Royal College of Art. He continued to paint and exhibited at the Royal Academy, the New English Art Club and the Royal Society of Painters in Water Colours, as well as at the Society of Graphic Art's first exhibition in 1921. In 1921 he was elected as Master of the Art Workers' Guild. He designed the great mosaic in the tympanum at Westminster Cathedral from sketches left by the architect John Francis Bentley; the work was completed in 1916. Bell worked from 1922 on mosaics for the Palace of Westminster. Bell was often illustrating verses from the Romantic poets and in fact was often asked to illustrate their books.

His romantic Pre-Raphaelite painting of Catherine Cornaro, last queen of Cyprus, abounds in symbolism. The queen portrayed as a beautiful woman in her prime, wearing her crown, seated on her throne under a canopy. Her head is bent downwards, her eyes lowered and although dignified, her face expresses sadness, as if she knows her fate. Catherine is representing Venice. A Venetian guard has his back to her. Dressed in military attire, he holds his staff, and has an expressionless, cold face. His left hand rests on a chair on whose back, and obvious to the viewer, is embroidered the lion of St. Mark holding the book open with a rather illegible inscription “Ha*** Marco”. On the right hand of the picture an Ottoman dignitary, in long robes and wearing a turban with a red fez, is bending towards and queen and is about to kiss her hand which he is holding in his palm. Although the viewer cannot see the Ottoman’s eyes, he appears to be approaching the queen with respect and reverence, but his body language seems to express a calculative attitude. The painting is obviously presenting the last years of Venetian rule. Already the Ottomans are making their intentions quite clear about wanting to take over the island of Cyprus, while the Venetians are turning a blind eye and a deaf ear. Their small acquisition cannot be allowed to cause them a major incident, nor are they willing to enter into long wars for it. The Ottomans know very well that Cyprus can be acquired relatively quickly and easily. Venice is slowly taking her leave and Turkey is flirting with the throne of Cyprus and cunningly paying homage to beautiful Catherine. In line with the title, Venice is about to lose the gorgeous East and retract back into West. The painting is a strong example of Romanticism and Colonialism. The nineteenth century being the century of Colonialism had its influence on the artist, and places the execution of the work towards the end of the Romantic movement which was then receiving the first effects of decolonization.

The colours of the picture are strong, Venice red, dark shades of green and a pale white contrasting with the red fez of the Ottoman. The style is typical of the Pre-Raphaelite era. Large eyes, clear almost Hellenistic profiles, long arms and much body language. The work is framed in the original frame chosen by the artist, used over and over again by him and typical of the Victorian era.