Did You Know? Panayia Kanakaria 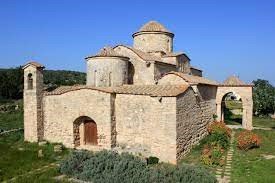 This well-known church of Cyprus is situated at the entrance of the village of Lythrangomi. The name of the village of Lythrangomi means the red village. The church is a rare example of the 6th century, three aisled, with two domes. The narthex is a later construction. It is said that an Arab took his arrow and aimed it at the mosaic of the Virgin. Suddenly blood started pouring all over him from the mosaic. He started running shouting kan – kan which means blood and the church took the name of Kanakaria.

People of the village believed that his ghost wanders around the area. The name includes the Turkish word akar which means flowing. In the Greek etymology, the word kanaki means caress. Kanakaria was famous for the mosaic of Virgin with child Christ on her lap and the 4 apostles round her. The posture is supposed to be taken from archaic idols. The Kanakaria mosaics, dated to 525-530, are among the few to have survived a subsequent iconoclastic period. The mosaics of church, in Northern Cyprus, were stripped in August 1976 by Aydin Dikman.

In November 1979, an English tourist reported to the Cypriot authorities that the church had been looted. A major breakthrough came in the 1980s when Munich police arrested 60-year-old Aydin Dikman after he was videotaped selling stolen goods. The arrest was made possible by the cooperation of Dikman's former client, Dutch art dealer Michel van Rijn. In apartments rented by Dikman, police found frescoes, mosaics, and icons estimated to be worth more than $40 million. The artworks were taken to the Bavarian National Museum for evaluation, while Dikman was taken to prison. In 1997 some of the Kanakaria mosaics were returned to the Church of Cyprus. Outside the church, pieces of architectural fragments indicate that there was an older 6th century byzantine church which was replaced by a 12th century Romanesque church which also underwent modifications in the 13th and 15th century.