Did You Know? Names of villages 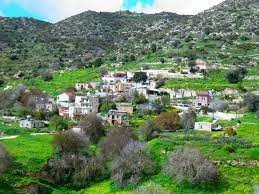 Akoursos: During the medieval period the area belonged to the Templars and there was once a manor where monks used to live. In 1200 when it was a fief of the Templars its name was Acurzos. The village came into being again during the Ottoman period and the name is Turkish, as was the village. The name comes from two Turkish words: Akar and Su which mean Running Water. There is a village of the same name in Turkey near Afion Karahisar. From Fitzgerald’s website one can read about the following legend: "Only a short distance to the north, along the windy road that curls up the hills there is a plateau to the rear of a mosque. This plateau, named Laoni tou Tsakrii (Hollow of the Fight), was made famous by being the central battle ground between two rival Kings. Here King Rose-Petros, defending the village of Akoursos, defeated the aggressor, the King of Inia. However upon walking away from the slain King of Inia King Rose-Petros was shot in the back by an avenging archer of King Inia's troop. King Rose-Petros was later buried in the Cave of Ammpa which lies to the top a cliff whereas King Inia was buried in Cave Papadimantra which now is home to herds of goats. Time, it would seem, favours the benevolent.

Alambra: Apparently the villagers believe that the name comes from a-lambron, which means no fire. The story goes that the village which was once surrounded by forests was endangered by fire which spread all around it and the people were going to be burnt alive. They all went to the church of Saint Marina to pray for salvation and they saw the figure of a young girl leaving from the church and going towards the fire. She kneeled on the edge of the burning woods and prayed for the village and suddenly the fire died out. Therefore the village took its name A-lambra.

Kazafani: The original name of the village was St Epiphanios. The Francs used to call it Casal-Pifani, the village of Epiphanios. It was written as such in Greek and then shortened to Kazafani. During the medieval period many Maronites lived in Kazafani but in 1596 they had to either move or change their religion to Islam. Thus the village had Moslems inhabitants and a half French, half Greek name. In the seventeenth and eighteenth centuries it was a Turkish village but in the late nineteenth century the majority of inhabitants were Greeks. The village was famous for its pasteli, a paste made of carob juice and sesame seeds.

Kaimakli: A suburb of Nicosia which carries a Turkish name probably coming from the word Kaimak, meaning cream. Apparently the inhabitants produced very tasty cream and yogurt. Nevertheless, during the medieval period Kaimakli was called Alisoklepsis, Misoklepsis and Misti. The village was famous for its builders and stonemasons who were probably taught the craft from the Francs.