Did You Know? Mount Nemrud 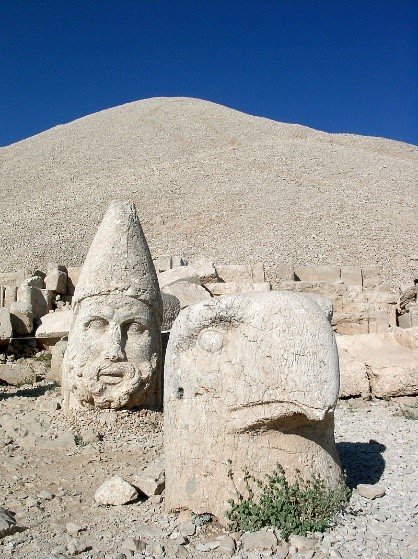 Mount Nemrut, or Nemrud, is a 2,134-metre-high mountain in south-eastern Turkey where, on its peak, lies the mausoleum of Antiochus (69-34 B.C.), with a number of large statues erected around what is assumed to be a royal tomb from the 1st century BC.

In 62 BC, King Antiochus I Theos of Commagene, built a tomb-sanctuary flanked by huge statues 8–9-metre high of himself, two lions, two eagles, and various Greek and Iranian gods which are evidence of the dual origin of this kingdom’s culture. The damage to the statues indicates that these suffered from Iconoclasm.

The western terrace contains a large slab with a lion, showing an arrangement of stars and the planets Jupiter, Mercury and Mars. Other possible uses for this site are thought to have included religious ceremonies, owing to the astronomical and religious nature of the monument.