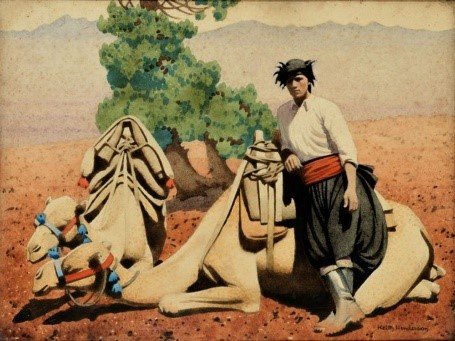 Did You Know: In the 1850s, in the suburbs of Smyrna, loomed a gang of robbers whose leader was Katirçi Yianni. They attacked caravans and carriages, even people passing by. But they were not an ordinary gang. Their leader would take all the money and loot and distribute them to the poor people of the area. Thus, he was much loved and even protected by the local impoverished communities who regarded him as their Robin Hood.

Nevertheless, Ketirçi Yianni was finally caught by the authorities and exiled to Famagusta in Cyprus. Famagusta then was a prison city. All criminals, exiles and unwanted personalities were being sent to serve their sentence in the walled city of Famagusta.

Ketirçi Yianni was destined to be chained to a column, by the old Venetian palace and live in a self-made shack. But his reputation spread all over the island and many people would go to Famagusta just to see the famous robber.

The French architect Edmond Duthoit found himself in Famagusta in 1863 and as he was approaching the Venetian Palace, a hand stretched out towards him offering him a pot of basil. He thanked the giver and asked who he was. He was told the story of Ketirçi Yianni. When he attempted to give Yianni some money, the convict refused with a smile and said this was a welcome gift.

Many years passed and the British arrived on the island. The Commissioner of Famagusta offered Yianni a few days of freedom, telling him to go to Varoshia and spend Easter with the Greek community. Yianni refused. He answered that if he was unchained and free to go, he would never come back and put the Commissioner in a difficult position.

Finally, the commissioner unchained Yianni and sent him to his house as a servant. There, Yianni helped with the cleaning of the house and garden and often served at table. He was a site of interest to all the guests and a conversational piece. When Yianni died, of old age, he was buried in the Greek cemetery at Varoshia.

There is no drawing of Ketirçi Yianni but his story can be found in the most beautiful path in the world, Edmond Duthoit and Cyprus, at the CVAR research Centre.