Did You Know? Kantara Castle 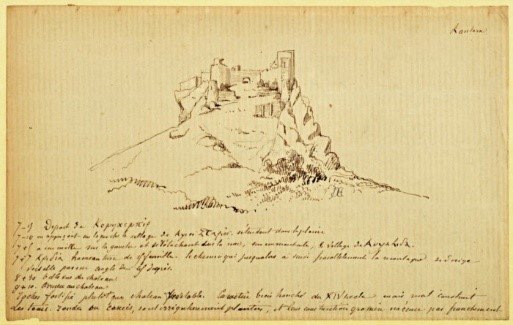 Among the theories put forward to explain the origins of the castle are that it was first built In 965 (after the expulsion of the Arabs from the island), or in 1091 by the rebel Rhapsomates, during the rule of Eumathios Philokales (1091–1094) or in the late 11th century after the Cilician coast was overrun by the Seljuk Empire or in 1096 as a countermeasure for the upheaval caused by the First Crusade.

The name of the castle derives from the Cypriot Maronite Arabic word kandak which means stone bridge.

Serving as a watchtower for pirate raids, an administrative centre and a place of incarceration, the castle it was taken by Richard the Lionheart in 1191, during his campaign against the island's ruler Isaac Comnenos.

Kantara castle, also called Le Candaire in French, appears in historical records in 1228. It was then occupied by the Imperialist troops of Emperor Frederick II and was besieged by the Royalists under Anselm of Brie. During that siege the catapult or trebuchet was used in Cyprus. Subsequent battles occurred throughout the ages around the castle.

In 1373, the Genoese imprisoned the King of Cyprus and the Prince of Antioch in Famagusta. The latter, with the help of his servant Galentiri, was disguised as a servant, escaped and took refuge in Kantara castle. He was dressed in rags and his face blackened pretending to be a cook's scullion. He wore a pot on his head and held another in his hand and declared that he was taking the pots to be re-tinned.

The castle must have been rebuilt c. 1300. Recognizing the importance of the three Kyrenia castles Kings of Cyprus James I and Peter II, expanded their fortifications. During their reign Kantara was transformed into a garrison castle, barracks and an enormous cistern were erected. Another cistern located at the basement of the castle was converted into a prison and later made into rooms for the captain of garrison.

When James the Bastard recaptured Famagusta, a company of Italian soldiers was detached to the castle. In the first room on the left is the oubliette, a dungeon where they used to throw the prisoners and left them to die in it.

The castle was finally abandoned by the Venetians in 1525. Stones from the building were used by villagers to build their own homes. According to D.G. Hogarth and Enlart, (1899) ‘You stand on the spine of a serrated limestone chain which, falling gradually on the right, run out between two turquoise seas, and on the left bends northwards in a vast blue crescent, jagged like a crown. Two thousand feet below, to the north, lies a narrow strip of forest, and across a misty sea, crawling into innumerable tiny base, you may descry the wild Taurus of Karamania, rising step by step to the snows. And commanding all this matchless prospect stands Kantara itself on a pillar of rock, its broken walls clinging to the leap of the precipice, and its great gate opening on a labyrinth of ruin, crowned by a little windy chapel. No painter has conceived a ferry castle more fantastic, no poet set his enchanted palace in a solitude more profound’. In Cyprus folklore the Queen, Rigaina, sits on a rock amongst the ruins looking at the sea. The rock is called the throni tis Rigainas.