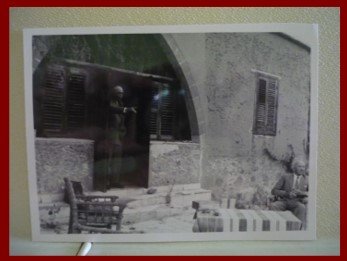 Up in the mountain just before entering Kyrenia, in an area called Jiklos, were two or three British homes in the 1930s and 1940s. A large part of the area belonged to Thomas Dray. He lived west of Kyrenia towards Lapithos, in a house which looked like a tower. He was in partnership with Scoresby, the husband of the famous explorer Katherine Routledge, who came to Kyrenia after her death in 1935. Dray and Scoresby agreed to inherit each other after death. So, Dray’s niece discovered in his home Katherine Routledge’s notes on the Rapa Nui islands. In one of the houses at Jiklos lived H. T. F. Duckworth with his Canadian wife Hope. Duckworth wrote a book on the history of Cyprus. Ms Duckworth was a pleasant and kind hearted woman despite her terrible appearance, she was cross-eyed and scruffy. When her husband died, she moved to a mudbrick house next to Tom Dray and gossip had it that she was competing with Ms Willis for his love. Later Ms Duckworth returned to Jiklos. Dray’s niece and his heir was Eve Dray who later married the archaeologist, Jim Stewart.

In another house up at Jiklos lived two ex-matrons of the British army known as “the Majors”, and also more known as the “cave women”, Betty Hunter-Cowan and Phyllis Heyman. Betty was older and more well off. She returned to Scotland in 1980. Phyllis was a great cook. In 1989 she left Jiklos and moved to Kyrenia town. Mostly secluded from the rest of the colony, they had very few friends and even fewer invitations. When someone would invite them, they agreed not to approach each other during the invite. They spoke with different people. So, when they returned home, they could spend many hours exchanging information and comments they had gathered during their visit. Thus, their loneliness was easier until the next outing.

A bit further down the mountain lived, during the 1940s, the retired pilot of RAF Thompson with his wife. He rented Adah Ciftlic, a house belonging to Lady Blackall. He was a well-known apiarist. Often he would move his bees to Kantara where the thyme was abundant and better, especially during spring.

Franklin Lushington claimed to have been a descendant of the Lusignan family. He first came to Cyprus in 1940 to recruit men for the British Army and the Cyprus Regiment. He was captured in Greece and having escaped he walked all the way to Poland. He married Nora, a beautiful woman, niece of the Chairman of the Scottish Academy of Arts, Sir William McTaggart. The couple returned to Cyprus in 1950. Although Nora hated the heat, she loved Kyrenia and she persuaded her husband to buy a small house from Thomas Dray. She was an excellent gardener. When they left they sold their house to Eve Stewart. Franklin was killed in a car accident in England and a while later Nora died in Spain. Rumour had it that she committed suicide. Franklin wrote the book Cottage in Kyrenia, pretending to be writing as a female, his wife.