Did You Know? Hammams 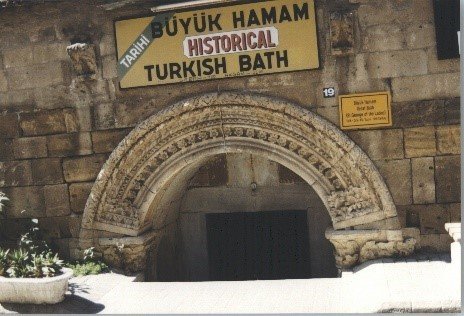 Public bathhouses existed in Roman and Hellenistic culture and were found throughout the Mediterranean world. They formed part of the life of the early Byzantine Empire up to the mid-6th century. However, their existence continued through the emerging Islamic societies, in the 7th and 8th centuries. The earliest Islamic bathhouses, known as hammams, were built in the region of Syria during the Umayyad Caliphate (661–750) and it was the Ottomans who were responsible for introducing steam baths to Europe.

A hammam is a steam bath following the model of the Roman thermae. The architecture evolved from the layout of Roman and Greek bathhouses and featured a regular sequence of rooms which bathers visited in the same order: the changing room or undressing room (corresponding to the Roman apodyterium), the cold room (like the Roman frigidarium), the warm room (like the tepidarium), and the hot room (like the caldarium). The main chambers of the hammam are usually covered in vaulted or domed ceilings, which give them a distinctive profile on the urban skyline. The domes and vaults of the steam rooms (especially the hot room) are notable for being pierced with small holes or skylights which provided natural lighting during the day and allowed excess steam to escape. The ceiling and the walls are clad with steam-proof materials such as varnished plaster or (for the lower walls and floors) marble. Heat is produced by furnaces which provide hot water and steam, while smoke and hot air is channeled through conduits under the floor. The usual customs of a hammam require visitors undress themselves but retain a loincloth, and then proceed gradually from a cold room to progressively hotter rooms, inducing perspiration. They are then usually washed by male or female staff with the use of soap and vigorous rubbing, before finishing off by washing themselves in warm water. Traditionally, the masseurs in the baths, are called tellak.

Although in early Islamic history women did not use hammams, by around the 10th century it became common practice in many places to provide separate hours (or separate facilities) for men and women. This allowed the hammam to acquire an important role in the social life of women as one of the few public spaces where they could gather and socialize away from men. On many occasions they became places of entertainment (such as dancing and food, especially in the women's quarters) and ceremonies, such as before weddings, high-holidays, celebrating newborns, beauty trips. One exception to this gender segregation is the presence of young boys who often accompany their mothers until they grow old enough to necessitate attending the male hammam with their fathers. The separation from the women's hammam and entrance to the male hammam usually occurs at the age of 5 or 6.

In Cyprus the Ottomans built many hammams many of which continue to function today, mainly in the cities. The Omeriye Baths in Nicosia, date to the 15th century and are next to the Omeriye Mosque serving thus for ablutions. The complex was founded by Lala Mustafa Pasha in the 1570s, soon after the Ottoman conquest of Cyprus, by reusing the earlier 14th-century Augustinian church of St. Mary which was damaged in the Ottoman siege. The hammam was restored in 2002–2004 as part of the Lefkosia Master Plan and is still in use today. Another bathhouse, the Büyük Hammam, dates from the same period.

The Archduke Louis Salvador of Austria, who visited Nicosia in 1873, wrote in his book that there were eight hammams in the capital in the Turkish fashion. The hours before noon were appropriated to men while women were admitted in the afternoons. Two baths belonged to the government while the others were privately owned. Büyük Hammam is government owned while Emir Hammam, Yeni Hammam, Kurkut Hammam are privately owned.