Did You Know? Government Cottage 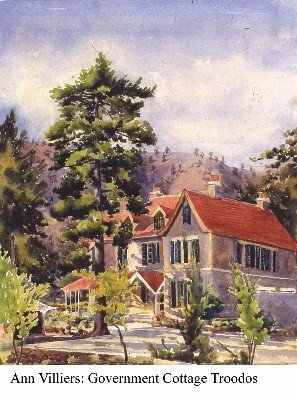 During the end of the nineteenth century, the custom was to go to the hills from about the middle of June to the middle of September. Price per diem was 8 shillings a day in camps and in those hotels springing up at Platres and Prodromos which were overflowing by visitors from all over the Middle East.

Government Cottage is believed to have been erected in 1880-82. In the ADC’s office, there used to exist a typewritten notice which said: “This house was built by the poet Rimbaud the friend of Verlaine in 1885”. It had the appearance of a Swiss chalet or a Scottish hunting lodge and they say it was built and designed by Arthur Rimbaud during his stay in Cyprus in early 1880.

The sum of 1000 pounds was devoted to improvements at Troodos and Platre in 1913. A club house was erected with tennis courts, a golf course and bridle paths were formed. At Platres, a piazza and additional carriage roads were constructed and benches placed at view points. Along with these improvements, Government Cottage was largely re-built by the public works department in 1920. A hard tennis court was included. Government Cottage grounds were delightful. There was plenty of water available and the kitchen and fruit garden were excellent. To eat cherries and peaches direct from the trees was a new and delightful experience for the inhabitants.

Sir Harry Luke described Government Cottage as an unpretentious affair built in 1880 as a summer residence for the second High Commissioner.

It is an unpretentious affair of local stone, like a rough shooting box and the person engaged to supervise its construction was an unlikely, inappropriate foreman. He was the vagabond aux semelles de vent, (a vagabond with soles of wind). This is how his close friend Verlaine referred to Arthur Rimbaud who died at the age of 37. He had landed in Larnaca, 5 months after the arrival of Wolseley. He accepted a contract of 150 francs, or 6 pounds a month, to supervise the quarrying of stones at the village of Oroklini but contracted typhoid and had to go back to France to recover. Returning in 1880 he took up the building of the Palais du Gouverneur.

Lord Winster affixed the following tablet to the wall of Government Cottage:

His own hands to the

Unfortunately Cyprus did not inspire Rimbaud, who never wrote a word about the island.

Just before World War II, the Forest Park at Platres was filled with Polish refugees; Berengaria Hotel in Prodromos full of Italian refugees. The rest were scattered all over the mountain villages.

Just before World War II, timber was necessary in the Middle East for war purposes so felling began in Cypriot forests. Government Cottage area lost 100 trees but this was not even noticeable.

During the summer of 1959 Sylvia Foot spent some days in Government Cottage. Due to the EOKA troubles the Cottage was encircled by a guards encampment. "It was an ugly grey stone house with a hiddeous green corrugated-iron roof. The rooms were large and out of proportion. The front hall dressed in gay kilims had an old Cypriot painted wall cupboard and shelves and beautifully carved walnut antique chests. Outside there was a small lawn with cherry trees, chestnut trees and a great Wellingtonia (Giant Sequoia)." While there, towards the end of her stay, she received a Urgent and secret letter from her husband Hugh Foot from London who was notifying her to get back to Nicosia and prepare for the arrival of a number of VIPs including PM MacMillan. The shadow cabinet and their wives were to be also invited (45 guests). Small coffee meetings, people would be coming and going all day and would be needing drinks, tea, etc and certainly more dinners. No one was to find out anything before his arrival. She knew it was something big. At that moment Electra Megaw walked into the room. Sylvia slipped the letter under the blotting paper on her desk and followed Electra for tea so as not to raise any suspicion. She announced they had to return to Nicosia next day, Sunday afternoon, because Hugh was probably returning from London having finished his duties there.

Sylvia packed the children, herself and the next day rushed back. On the way she realised she had forgotten the letter under the blotter. The Greek housekeeper could find it and take it to EOKA. She nearly died. It was too late. The PM was arriving shortly. She resorted to praying! The following summer of 1960 she was writing her recollections at her desk in her bedroom at Government Cottage, looking outside the window at the tops of the dark green pine-trees. The Urgent and secret letter was still under the blotter. By September the road to Troodos was full of Cypriots going off to barbaque picnics, smiling faces, happy noises.

Cyprus was given its independence.