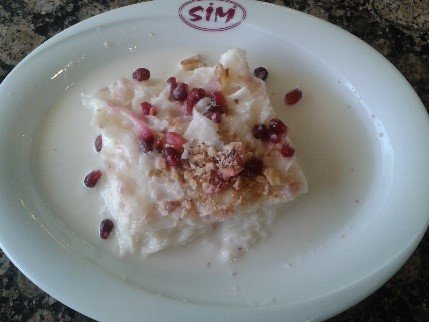 It was first served in 1477, and the name has Persian origins. The 14th century book Yinshan Zhenyao, written by a Mongol physician of the Yan dynasty mentions güllaç as a dish used by Mongol and Turkic tribes and exhibiting Chinese influence.

It is made of leaves of corn starch and/or wheat flour, soaked in rosewater or milk and sprinkled with walnuts between the layers, sometimes also using pomegranate. Some people consider güllaç as being the origin of baclava, maybe because both desserts are made of thin layers of dough. But güllaç is less sweet, has no sirop, is refreshing and much lighter than baclava.