Did You Know? Cyprus Aeterna 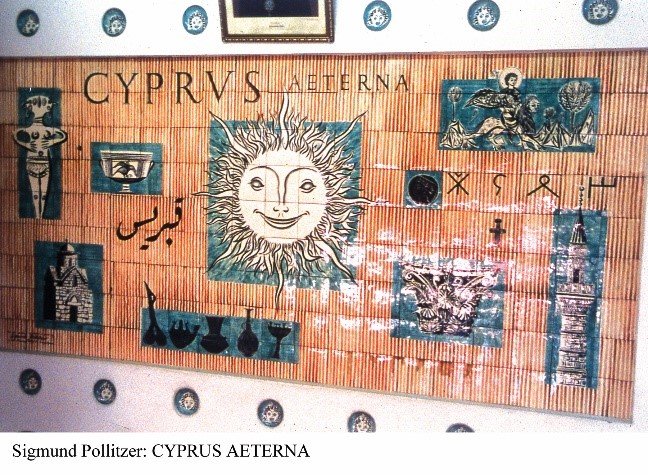 Sigmund Pollizer, (1913- 1983) was a British artist who came to Cyprus in January 1948 for a short visit that was to last many years. He lived by the coast near Kyrenia town.

In 1955, the artist was chosen to decorate the foyer of the new Public Relations Office in Nicosia, presently the House of Parliament. He produced a huge mural consisting of 84 plates and 171 tiles covering a space of 18 x 9 feet. The design had to be suitable to a building that housed both a theatre and a Government Department, therefore it had to be dramatic and in praise of some aspects of Cyprus.

Pollitzer found inspiration in the thousands of years of art in Cyprus and allowed his own preferences to dictate the choice of shapes. The theme was Cypriot but so was the execution of the mural decoration. Yiannis Eliades and his son Costas of the Keramey’s Pottery at Ayios Georgios near Kyrenia worked with great enthusiasm under the artist’s instructions. All tiles and plates were made by hand and baked once. Pollitzer took six weeks in his studio to fit the pieces together, numbering each one at the back and painting the full design on the face of the tiles and plates. Then, with extreme care not to touch the freshly applied decoration, the pieces were returned to the pottery for glazing and a second firing. Back to the studio these were then assembled again, each one individually wrapped and sent off to the fixers in Nicosia. The workmen of the Public Works Department, under the artist’s supervision and that of the architect’s, Mr. Christophides, did a wonderful job of laying out the mural.

The artist chose Cyprvs Aeterna as the title of his work. Cyprvs is the Latin word for Cyprus and woven into the design are the Arabic, the ancient Greek and the Cypriot syllabic word for the island. The central device of a smiling and benevolent sun symbolises the one constant element in the island’s life. On the left is the image of a terracotta female figurine (1400-1200B.C.) with a bird-like face and enormous ears perforated for large clay earrings. She is an oriental inspiration of a goddess found in Syria and Cyprus. Below is a miniature Byzantine church of the type of St. James at Tricomo, while above this panel is a Kylix of the early Iron Age, or Geometric period (7th-6th century B.C.). Almost under the sun is a long panel depicting five different forms of Early Bronze Age pottery (2,200-2,100 B.C.). To the right of the sun one tile portrays an enlarged design of a Roman coin bearing the image of a crowned Aphrodite. Below is a Roman Corinthian capital such as those to be seen at Salamis. Above rides Ayios Mamas, a young local saint on his tamed lion and carrying a lamb. Directly below him is a representation of a steatite ornament in the form of a cross-shaped idol which carries a small cross hung around its neck (3,000 B.C.). At the extreme right bottom corner is the top portion of a Turkish minaret, the latest in date of all things represented. The whole recessed panel is framed by a number of plates with designs based upon antique masks, the large alternating border depicting tragic and demonic masks perhaps like those used at Soli 2,000 years ago. The colours used are clean and bright, typical of painted pottery and pleasing to the eye. The rust background is reminiscent of the Cypriot terracotta and the island’s red earth while the striking green tiles remind one of the verdure of the Troodos mountains. In the artist’s own words: …I have sought to combine in one panel a great many elements, in praise of Cypriot art… Here, set firmly in cement, impervious to wear and to dirt, unfading and comparatively inexpensive to produce, is a large scale mural decoration made entirely in Cyprus.

Thus remains an artist’s conception of a multicultural island.