Did You Know? Caterina Cornaro 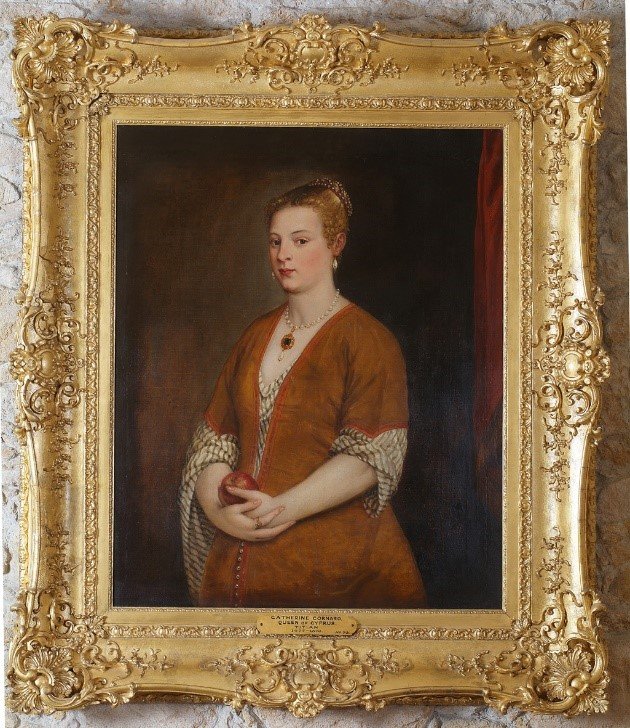 On the second floor of CVAR there is a special section devoted to the last tragic queen of Cyprus, Caterina Cornaro. Among many paintings there is a sixteenth century portrait of the queen presenting her after she had left Cyprus. It is interesting to look carefully at this painting.

Here is Caterina, not dressed like a queen, but like a noble lady. She wears no crown, no royal attire. Instead, the dress she is in reminds us much of the Cypriot dress: the sayia and the aladja. This can be interpreted as the export of Cypriot dress to Europe. The sleeves are in the style but also the colours and design of the Cypriot aladja whereas the sleeves of the overdress are typically those of the Cypriot sayia.

Caterina is wearing still her favourite jewel: the tear drop pearl earrings, which are seen in most paintings of her. According to Sir George Hill, the queen’s mother came repeatedly to Cyprus to stop her daughter from spending so much money on jewels. Caterina is holding an apple. An allusion to the apple of the Hesperides, when Paris, asked to give the apple to the most beautiful of the goddesses of Olympus, he gave it to Aphrodite. Here the artist has given the apple to the most favourite of queens, to Caterina, our Aphrodite.