Did You Know? Bellapais monastery by Louis François Cassas 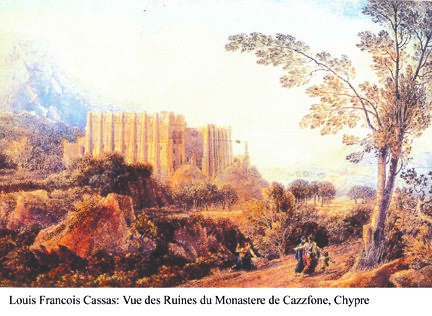 In 1783, Louis Francois Cassas (1756-18270, a celebrated French artist was invited by Choiseul Gouffier, French Ambassador to the Port, to join him in Turkey. Gouffier was a collector of antiquities, and an amateur traveller, and he needed a good painter to illustrate the wealth of the East. This enormous project was estimated to take about 10 years to finish.

Cassas is topographically correct and treats his subject-matter, in this instance the landscape, as a man trained in the rules of art. The landscape invites the viewer to admire the monastery which is placed in the centre left of the painting with a background of impressive mountains. The vegetation envelops and complements the focal point of the painting and partakes in its grandeur. The large, tall tree on the right corner of the painting, Ailanthus altissima, a tree to be found in high altitudes of the island originates from China but by the Middle Ages was naturalised in Southern and Central Europe and believed to then have been introduced to Cyprus by French monks who brought seeds from their motherland and planted them near and around the monasteries they built. Is also known as the Tree of Heaven. But what of the figures? There are two women and a child, walking up the path and on the left side of it they have just left behind them a figure of an elderly man, most probably a beggar, resting on a rock. The central figure in the group, the taller woman, looks at the beggar over her left shoulder and points at him with her outstretched left arm. Obviously the two women are discussing the beggar while the child is eager to walk on. What is definitely peculiar in Cassas' representation of this group and even in contradiction with the precision characterising the treatment of the landscape, are the costumes and indeed the very presence of this group in the painting. No women would be walking along country paths on their own in 18th century Cyprus, certainly not dressed in this manner. The costumes presented here by Cassas are more classical, grecian clamύda, westernized, rather than Cypriot. Documentation exists which defines the 18th century Cypriot attire as a mixture of Turkish and Greek Island 18th century costumes.

Cyprus, being poor, indeed very poor, had no fine costumes. Women never went out of the house unless it was to the market, to another house or to church. They were then always accompanied by a male escort. The beggar is surely a Greek Cypriot. He is wearing a Greek costume, easily distinguishable from the colour of the vraka, or pantaloon, which is dark blue. The Turks wore white pantaloons; the gilet he is wearing is of the greek traditional costume and the headdress, the red cap was what the subservient Greek Cypriots wore during the Ottoman period.

Cassas lived at a time when France was about to undertake the greatest social change of the century. Humanitarian ideas were triumphing and the smell of revolution was in the air. Writers and artists were the first to sense and be affected by such phenomena. Cassas could not have been the exception. Although an accomplished architectural draughtsman and an exceptional topographer, in this painting one can detect the emotions of a man of his times, which reveal him as a prodromus to Philhellenism. In a landscape that is totally westernised, with absolutely no innuendo as to the political state of this Island, that is the Ottoman rule, the painter took the opportunity to use symbolism and express his own feelings as to what he felt on his journey. Would it not be plausible to assume that there is a historical allegory in the foreground of the painting?. Can the beggar or the old man who looks tired and helpless, on the side of the road, looking towards the ladies passing by, be the Greek Cypriot people? He is a reject on the side of the road bypassed by all; Cyprus is on the wayside. No nation is really interested to see or help this country that once enjoyed the primary role of the Mediterranean islands. The rayias, be he in Greece or in Cyprus, must lie by the side of the road. But what of the women? The women are dressed in the ancient costumes of the Greeks known as the hlamyda. They are walking briskly up the hilly winding path, leaving the beggar behind. Soon they will reach their destination which is the glorious edifice in the picture. The monument that represents the glorious past of Cyprus. Can these women be part of that past, in contradiction with the beggar who is the present? They are the Cyprus that was, and he is the Cyprus that is unable to reach them or the monastery; unable in other words to re-instate or re-live the past associated with the greek or the Frankish elements. They point at him and discuss him but they move on to the monument where they belong, to the glorious past. Alternatively, Cassas was perhaps identifying the Island and its inhabitants totally with western culture, [the hlamyda being the attire of the ancient Greeks, Greece being part of Europe,] to which it once belonged.

The watercolour can be seen in the ground floor of CVAR.