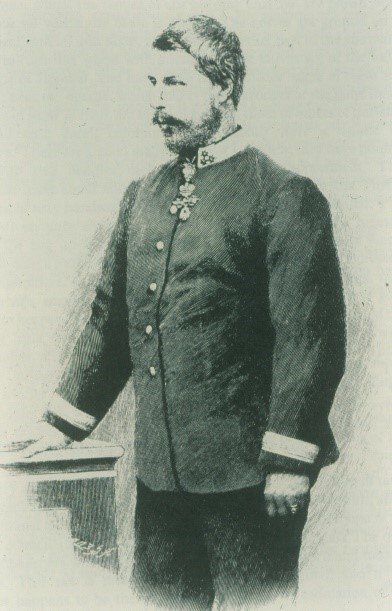 His full name was Archduke Ludwig Salvador Marie Josef Johann Baptist Dominikus Rainer Ferdinand Karl Zenobius Antonin. He was born in 1847 in the Pitti Palace in Florence, the third son of the Grand Duke of Tuscany Leopold II and the Archduchess Maria Antonia, daughter of Francis I Bourbon king of the Two Sicilies. Political misfortunes affecting the family lead a lady in waiting to prophesise about the young Archduke that “Poor boy, you will own many properties, many castles, but you will never have a home”. Salvador received a befitting education in the Habsburg domains but after a short lived period of official duties he chose to retire into private life. Although he had a villa near Trieste, he bought a yacht, the Nixe, which he described as “a country house surrounded by eternal youth, for on our globe only the sea remains eternally young”. He loved Majorca and bought a house there but from 1870 to 1914 he travelled continuously all around the Mediterranean. The Nixe carried many friends from various countries, pets, poets, painters, writers and chaplains, often making Salvador look like the ringmaster of a circus! This peculiar man never stopped writing. He wrote fifty works amongst which the book Lefkosia, the Capital of Cyprus. Originally it was written in German and later on translated in English, but a fire destroyed the freshly printed book and only a few copies survived. Salvador’s Lefkosia gives the best description of the city in 1873, when he visited. Apart from describing the city walls, the neighbourhoods of Nicosia, the religious monuments and civil buildings, Louis Salvador gives detailed imagery of the bazaars and the local population. This book can be read at the CVAR Research Centre.