Did You Know? Cyprus is full of spirits that talk of its history and culture 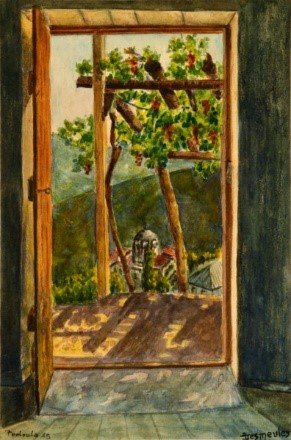 Ayia Solomoni, a catacomb on the main road to Paphos harbour marks the story of the Seven Sleepers, or the Seven Maccabees. A mother and her seven sons were buried alive in this underground hole for not forswearing their Christianity.

Today, pilgrims go and wash in the spring of holy water there and leave a piece of their clothing on the tree at the head of the flight of steps which lead to the tomb. The spirits of the Seven Sleepers listen to their prayers and look after them forever.

A very strange monument in Cyprus is a large Roman tomb converted into a chapel, near Pano Archimandrita. In a large niche in the north wall lie hundreds of bones and sculls said to be the remains of 318 saintly men. They landed in Pissouri and walked over to Alekhtora village and led by an archimandrite came to this village where they were massacred by the heathen. Just there is the spot of the only woman who accompanied them, a leper, who was also slain. Nearby, the villagers show the footprints of these men and their horses. Their spirits still linger around the area during winter nights.

About two kilometres from the village of Phini lies the church of Cosmas and Damien, or Ayii Anargyroi. The inhabitants say that they often see a young man riding a horse, coming out of the church every Saturday evening. They believe that he is one of the "Anargyroi" Saints, heading out to heal those who need his help. Other people claimed that some priest, wearing vests of a previous era, used to incense outside the church in the mornings. This priest was accidentally seen by a local girl who was so upset that, in a few days, she died out of fear.

At the small chapel of St Nicolas in Kalopanayiotis you might come across a white dog. It is the dog of the saint. This animal is harmless, it just wanders around looking for its master, the saint. Visit the church, light a candle, see the surrounding view and let sleeping dogs lie.

The village of Pedoulas is one of the highest on the island and affords magnificent views to the visitor. There are many small hotels around, but be careful of the ghost of Pedoulas! The poor man comes out of his grave at night and walks about, entering houses and making mischief. He moves furniture, breaks glasses and steals things. Numerous times the inhabitants of the village asked for the bishop to exorcise him but it seems not to work. So, behave, or else you will be called the ghost of Pedoulas!

St Helena landed in Cyprus c.327 and rested by the banks of Vasilikos (the Royal) river. She fell asleep and in her dream an angel told her to build a church and place in it the cross of the Penitent thief, and another one depositing in it a piece of the Holy Cross. So she did. She built Stavrovouni church (of the Mountain of the Cross) and a small church where she landed, at the village of Tochni.

In 1318 the Cross of Tochni, which had the piece of the Holy Cross within it, was stolen by a Latin priest who wanted to take it abroad. But his boat almost perished in a sea storm. So scared was he, that he returned to the shore and threw the cross in the centre of a hollow carob tree. The cross remained there for years till it was found by a young shepherd boy. But its authenticity was doubted by the Latin bishop of Famagusta. And the cross was put to trial. It was decided to be put in fire and if it did not burn it would be the true cross, if it burn it would be a fake. This took place in the palace and in the presence of the royal family. The cross did not burn and seeing this, Queen Alice, wife of King Hugh, who had been struck dumb for entering the church of Macheras which was forbidden to women, started talking after three years of silence.

The present nineteenth century church of Tochni, containing a piece of the holy cross, is built on a bridge over the river and the reason is as follows: The village was infested by 40 evil spirits who made life hell for the inhabitants. A priest advised them to dig a deep pit at the one end of the bridge and then he enticed the evil spirits into the pit. Once there, the priest clapped a cover over the pit and built the church on top. So the evil spirits of Tochni are still trapped under the church. An inscription on a cliff in the river valley near the village, cut in deep coloured letters, has never been deciphered. Is it a magic formula to keep the spirits dormant? Is it a protective prayer? No one knows.

The monastery of St George the Distant at the far end of Larnaca Salt Lake was always a place revered by both Christians and Moslems. This St George, also known as Kidr, heals children with feet problems, hence often pairs of little shoes are found hanging outside the church’s door. St George the Distant comes from far away, from the Holy Land. He crosses the sea on his white horse twice a year and stays for three days each time at his church in Larnaca. In stormy winter nights the people hear the galloping of his horse and the knocks on the door of his church, for the priest to let him in.

Very close to the old castle and harbour of Limassol is the shrine of Pir Ali Dede, a holy man of Islam, protector of sailors. He came to Limassol in 1570 with the Ottoman army, carrying his sceptre which calmed the sea. During the fighting he was killed and buried with his sceptre. He is also regarded as the protector of children. Thus, if a woman loses her children after birth she goes to the shrine and deposits her latest new born. Another woman would take the baby, provide for it and return it to the mother upon receipt of the baby’s weight in meat. Often the Moslems of Limassol claimed that Ali Dede would appear to them as an old man with a long beard and a turban on his head.

The pencil and charcoal drawing above by Louis Cheron, of Aphrodite, our Rigaina, can be viewed on the ground floor of CVAR.

During the Ottoman siege of Famagusta, in order to prevent the Turks from entering the city through the narrow entrance of the Arsenal, the Venetians placed a complicated contraption of knives forming a wheel which cut into pieces anything that tried to go passed it. Many soldiers tried to force their way into the city and met with their death. Jamboulat Bey, in his efforts to raise the morale of his troops, decided to destroy the machine by sacrificing his own life. Mounted on his horse he charged straight into the wheel and although cut into pieces, the contraption was destroyed. He was buried with all honours within the bastion which carries his name till today. The Turkish soldiers often saw their brave commander holding his head beneath his arm and waving his scimitar, as do many Famagustians to this day. To this day many childless couples eat fruit from the fig tree that grew over Jamboulat’s grave to have sons.

The ‘Did You Know’ series is made possible with the support of OPAP (Cyprus).
— with ΟΠΑΠ Κύπρου.