William Turner, Journal of a Tour in the Levant, John Murray, in 3 volumes, 1820. 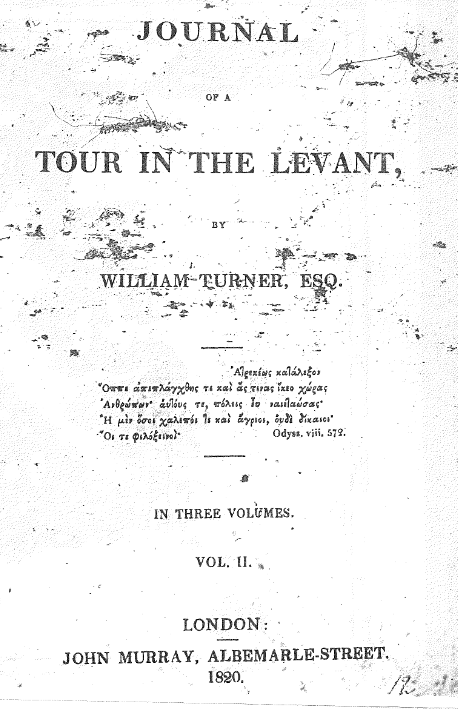 William Turner, Journal of a Tour in the Levant, John Murray, in 3 volumes, 1820.

"But come, now, tell me this and declare it truly:

whither thou hast wandered and to what countries of men thou hast come;

tell me of the people and of their well-built cities,

both of those who are cruel and wild and unjust,

and of those who love strangers.”

William Turner was a British diplomat and travel writer, born in Yarmouth, England, 1792. Through his father Richard Turner, secured a post in the Foreign Office. In 1812 he joined the British embassy in Constantinople under the newly-appointed ambassador R. Liston, where he served for five years. During his service he visited most parts of the Ottoman dominions in mainland Greece and the islands, as well as Cyprus. In March 1815 he made a trip to the Middle East. During his first visit he stayed but a few days in Cyprus, but during his second visit the same year in October, he stayed on the island for over a month.

Upon his return to Britain in 1816 he started composing a three-volume account of his travel impressions, in diary form and finally published them in 1820.

Turner with the ease he was provided by his diplomatic status, visited villages and towns, monuments and archaeological sites. But his line of interest run through deeper than just recording the many antiquities of the island. He took notice of the local manners and customs and provided information on the social and economic situation of the inhabitants as well as economic and demographic data of the population of Cyprus in 1815, which, due to the Ottoman administration, had decreased.

He gave data on the exports from the island, which were primarily by cotton, silk, wine and carobs: “Its principal commerce consists in cotton, wool, provisions, […] and silk, of which latter the trade was 150 ago so considerable as to attract here an English factory.”

He also took particular notice that trade traffic was constantly decreasing due to population decline: “It diminishes yearly, because the population is yearly diminished.”

“Journal of a tour in the Levant” has all the ingredients of a delightful and very useful read appealing to the modern reader.

You can find this book, and many more, in the Research Centre of CVAR.