Henry Rider Haggard, A Winter Pilgrimage in Palestine, Italy, and the island of Cyprus, accomplished in the year 1900, Longmans, Green and CO. 1908 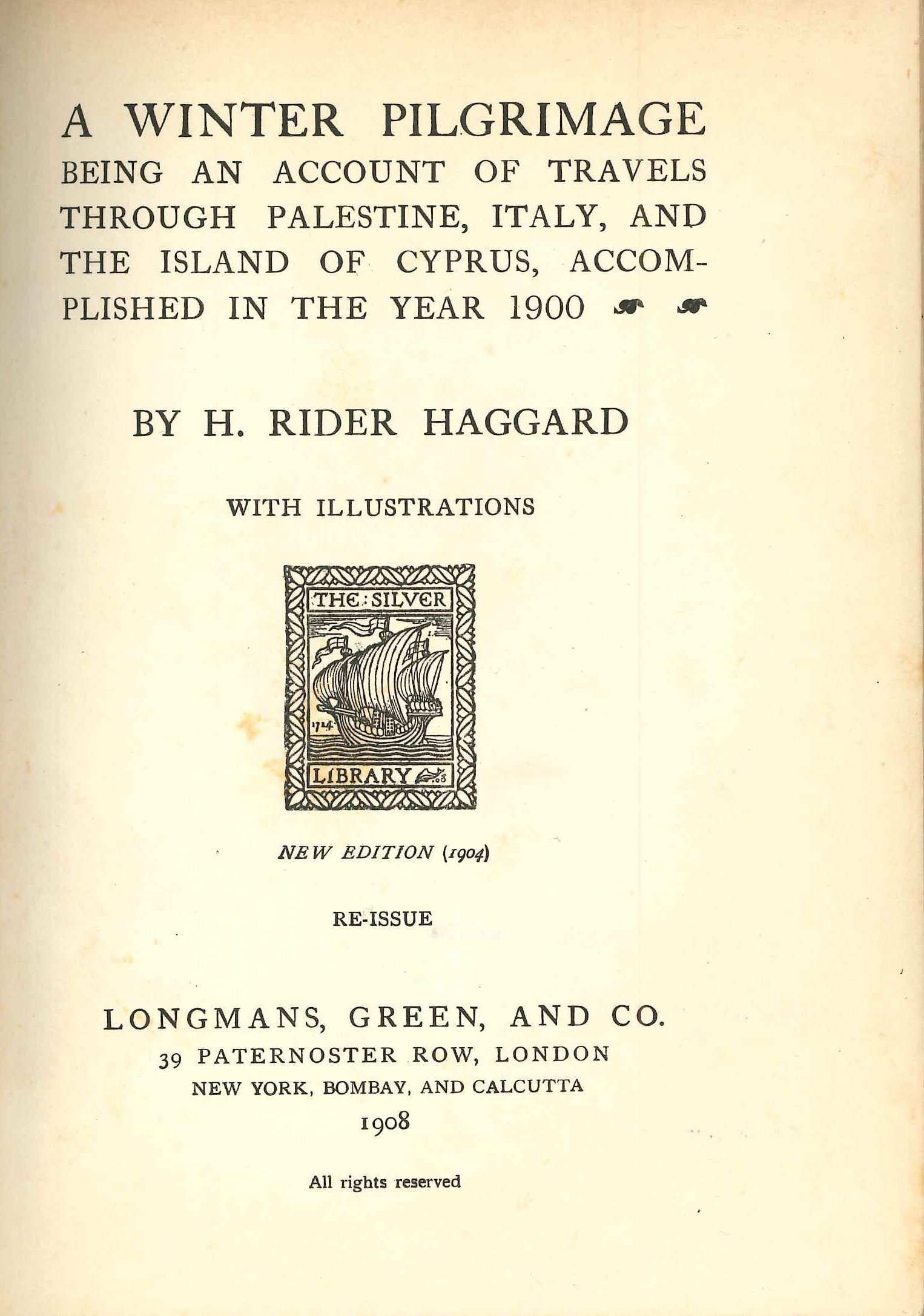 Henry Rider Haggard, A Winter Pilgrimage in Palestine, Italy, and the island of Cyprus, accomplished in the year 1900, Longmans, Green and CO. 1908

“The Island of Cyprus is one of the few countries in the world that I have sorry to leave.”

Sir Henry Rider Haggard (1856 -1925) was an English adventure fiction writer. His stories were mostly based in exotic locations such as Africa, Syria and Cyprus.

He was born at Bradenham, Norfolk, the eighth of 10 children, to William Meybohm Rider Haggard, a barrister, and Ella Doveton herself an author and poet. He received his education to Garsington Rectory in Oxfordshire. He attended the Ipswich Grammar School, in contrast to his siblings who graduated from private schools. After failing the exams to enter the army, he was sent to London to prepare for the entrance exam for the British Foreign Office which, he never took.

In 1880 he married Marianna Louisa Margitson (1859 -1943) and had 4 children. The couple travelled to Africa and later moved in Ditchingham, Norfolk, and later Kessingland .

He wrote many novels his most successful being King Solomon’s Mines, and its sequel: Allan Quatermain, She and its sequel Ayesha: the return of She, and A Winter Pilgrimage in Palestine, Italy, and the island of Cyprus, accomplished in the year 1900.

In A Winter Pilgrimage in Palestine, Italy, and the island of Cyprus, accomplished in the year 1900, Haggard describes his travels to Italy, Cyprus, Palestine and ends his trip at Jerusalem.

This book is an absolute delight to read even with the apparent stereotypes associated with colonialism, yet what sets him apart from other colonialist writers is the degree of empathy and sympathy towards the locals and the way of portraying them. He had an eye for interesting things, thus making his book noteworthy and entertaining even today.

The part devoted to Cyprus is describing his pilgrimage around the island trying to find the remnants of times of old. “No travellers visit this lovely and most interesting isle, in ancient days the garden of the whole Mediterranean […]. Taking the time to know the locals and observe their everyday life, he interacts with them when possible and either becomes fascinated or is humored by them. While describing the local Wedding Ceremony: “Also, and this was the strangest part of the ceremony, the two wreaths that I have described were taken from the silver basket and set respectively upon the brow of the bridegroom and the veil, where it did not sit at all well, giving her in fact, a bacchanalian air. [..]Indeed this part of the service, however deeply symbolical it may be, undoubtedly had a comic side.”

Overall, he sheds some light to a region that was at that time little known and even less written about. “Another thing became evident, that Cyprus is not a place of popular resort, since my nephew and I were the only first-class passengers” […]

“And so farewell to Cyprus the bounteous and the beautiful.”