A traditional olive press in Lyssos 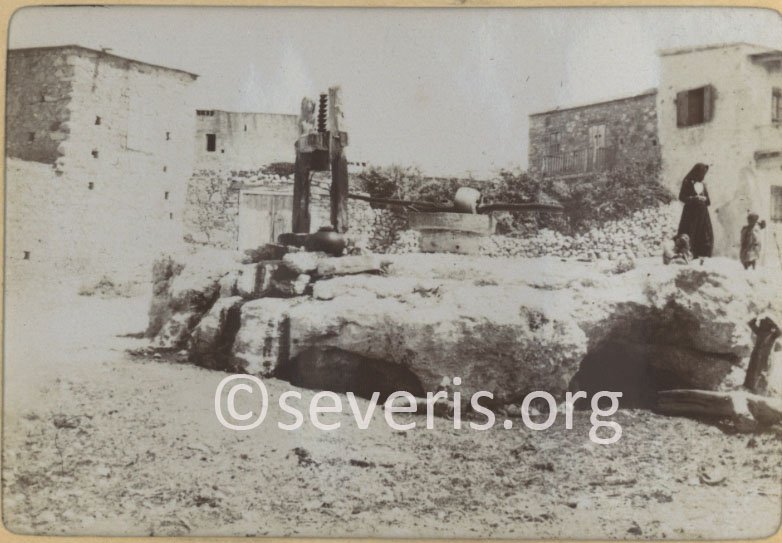 A photograph drawn from the personal holiday album of Sir Joseph Turner Hutchinson and Lady Hutchinson dating to 1900s. Sir Hutchinson served as Chief Justice of Cyprus from 1898 – 1906 when he proceeded to Ceylon to fill in the same position. Along with Claude Delaval Cobham, District Commissioner of Larnaca, they complied the Handbook of Cyprus published in London in six editions (1901-03-04-05-07), one of the early travel guides published for Cyprus. The photograph was captured at Lyssos village in Paphos, a Greek village, that was known since the Middle Ages linked with legends related to Digenis Akritas. Moreover, the name ‘Lyssos’, and especially the ending in -σος reveals an ancient origin, probably related to ancient Greek settlements in Asia Minor, brought to Cyprus by Greek settlers (cf. also ancient names Tamassos, Assos, etc.).

The photograph depicts an old fashioned olive mill in the background and a wooden olive press located on top of a high rock on the left. The animal-powered mill was used for crushing the olives that were then placed into baskets, the zembilia, and transferred to the olive press. The extracted oil would run down the high rock into clay pots. The oil was mixed with water and heated so that any foreign substance would sing down while the pure oil would remain on the surface as part of the cleaning process. A woman and two children were photographed standing on top of the high rock on the right. She was dressed in a dark-coloured variation of the traditional sagia, a white shirt and a dark-coloured headscarf. Due to the dark colour of her dress, it is assumed that she was a Greek Cypriot.