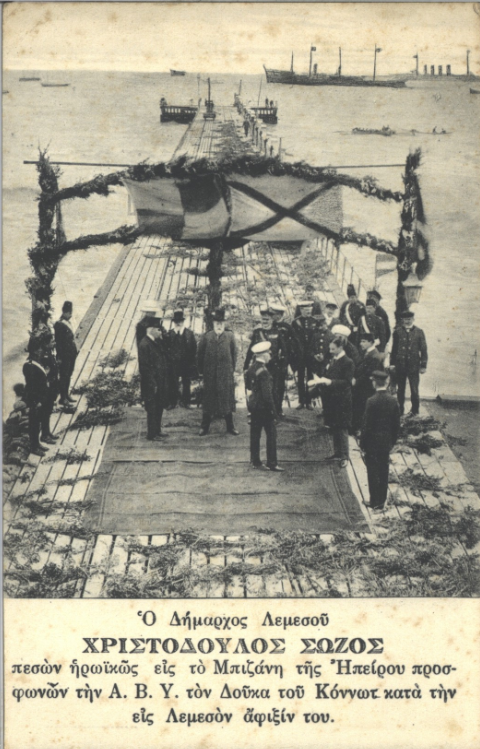 This Saturday, December 6th will be 108 years since the death of the mayor of Limassol Christodoulos Sozos who died in 1912 at the First Balkan War. This historical postcard drawn from CVAR’s collections that circulated after his death carries a photograph that depicted Christodoulos Sozos addressing H.R.H. Duke of Connaught upon his arrival in Limassol. Christodoulos Sozos was born in Limassol on 10 March 1872. He studied law at the National and Kapodistrian University of Athens and worked as a lawyer before the beginning of his political career. He served as a member of the Cypriot Legislative Council from 1901 until 1911 and in 1912 he was elected mayor of Limassol until his death. Among his major achievements were the opening of Limassol’s first public garden, the electrification, and naming of many streets, and the establishment of Limassol’s philharmonic. He was responsible for the organization of the first Pan-Cyprian agricultural and industrial exhibition in Cyprus and contributed to the construction of the Limassol peer. He was also responsible for advancing the city’s water supply by using the headwaters of Platres. At the outbreak of the First Balkan War, he persistently requested to enlist as a volunteer in the Greek army. In Athens, he met with Eleftherios Venizelos who tried unsuccessfully to convince him otherwise and to remain instead in Athens in military service.

The news of his death shocked every Greek Cypriot. As a sign of honor and gratitude to Sozos, his statue of him was erected in the public garden of Limassol while the national poet Vasilis Michaelides wrote a poem entitled “In memory of the heroically fallen Ch. Sozos” that was published in Salpinx (newspaper) on February 1st, 1913.