The writer Tomasio Porcacchi, in his description on the island of Cyprus, gives an account of the Siege of Famagusta by the Ottomans at the end of July 1571 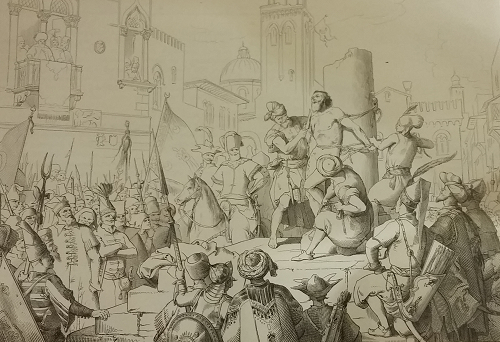 The writer Tomasio Porcacchi, in his description on the island of Cyprus, gives an account of the Siege of Famagusta by the Ottomans at the end of July 1571:

So the Venetians remained lords of Cyprus, and held it until 1570, when the Turks Sovereign Selim, without lawful excuse, and contrary to his plighted faith, declared war against the Republic for the conquest of the island. He landed a huge army at Saline on June 24 and besieged Nicosia, which he took by assault on September 8, cutting the inhabitants to pieces. Next he gained by capitulation the fortress of Cerine, whose defenders Gio. Maria Mutazzo, a noble Venetian, and Alfonso Palazzo surrendered it. After this, he marched his troops to Famagosta, which city he invested, up to the end of July, 1571, with more than two hundred soldiers. The city was defended by its Captain Marcantonio Bragadino, a Venetian gentleman, and Astorre Baglioni, the general commanding the troops in the island, who did all that men could do to harass the enemy and preserve the town. The assaults and attacks were many, and bravely borne, and the example left by the courage and constancy of Baglione has indeed taught us what advantage Christian troops have over Turks, seeing that he held out with so few men against so great a hostile force; and he would have proved himself even more their match, if, absolutely compelled by lack of ammunition and provisions, he had not agreed to treat with the Turks on honourable conditions. But these the infidels would not observe. Famagosta was lost, the officers who defended it killed or enslaved, and the kingdom of Cyprus, torn form the Venetian rule, passed into the Turkish Empire.