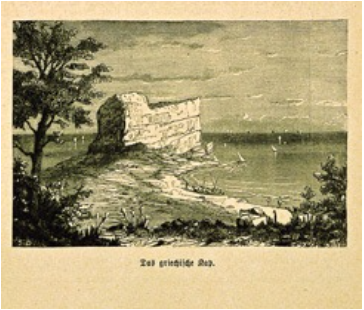 We set out from Larnaca on mules, under the protection of the consul’s jenizari, in order to make the tour of the island. We travelled eastwards and came to the bed of a torrent, called Camborounula which had water in it; I saw mounts near it, which might be the remains of some antient works. In three quarters of an hour we came to the hills that stretch to cape of Pyla: that head must be the antient Promontory of Dades; I observed an old tower on it. We came to the vale of Ormilia, where there are several houses and silk gardens belonging to the people of Larnica. We afterwards had a sight of cape Grega, probably the same as that which the writers of the Turkish history call cape Graecia, and was probably cape Throni of the antients, where there was a city of the same name. Going on I was told that we passed within four miles of Trapeza which, if not mistaken, is to the right, though Blaeu’s map puts a place of that name near Famagusta. This probably is a village near a high hill that was compared by the antients to a table and was sacred to Venus. I had a view of it on this head of land. This hill was over cape Pedalium, which may be the same as Ammochostus and I suppose it to be the northern point of that broad head of land, which is now called cape Grega. Pedalium is thought to be a corruption of the antient name of Idalium, there have been a town of the name in Cyprus, which was sacred to Venus. The Idalian wood was near it, in which, according to antient fables, Adonis, a favourite of Venus, was killed by a boar and they feign she turned him into a flower. There are two ports mentioned between this and Salamis, which are Leucola and Arsinoe.