The Swedish expedition at Soli was reaching its final stages as Alfred Westholm, aka Alfiros, wrote to his parents 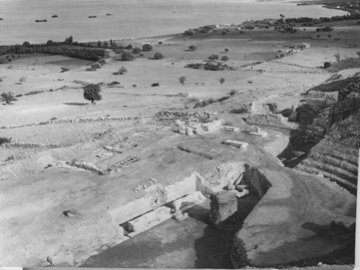 The Swedish expedition at Soli was reaching its final stages as Alfred Westholm, aka Alfiros, wrote to his parents:

I am still here for the work at Soli. It has taken much more time than I had estimated, I believe. The more one looks into the web of walls the more problems turn up – to a certain point. After that it will be possible to go through the excavation and see clearly in all directions with no worries. That part is finished, this correlates with that and that, and with Sarapis I, II and III and Isis and Aphrodite fit up with many other things. That is where I am at the moment, and this is how it shall have to be, even if someone else might have arrived at completely different results. I am beginning to become an authority on Cypriote walls. I would have been able to finish earlier if the rain had not poured down every day, with very few intervals. The writing paper turns into one wet mass and the wind rips at my wet, fragile drawings. Sometimes it is a huge endeavour just to get out to the excavation and back again, but it must be done. I work outdoors as long as it is light, then it continues at home at the drawing table. The housemaid has many times come in with breakfast before I have had the chance to even think about bed. That is how the last 14 days have been without interruption. But now it looks as though all is saved. Only one point remains for tomorrow, when I must make a small investigative dig. The area will ultimately comprise four large main temples to Sarapis (3 building periods). Priapos (1 period), Isis (2 periods) and Aphrodite (with at least 4 periods). Everything is so encased within and collapsed upon each other that I go absolutely mad. In addition there are several smaller “private houses” between the temples and larger temple areas that are visible at the edge of the trenches, as unknown factors to take into account. We have neither time nor funds to excavate these. I thus divide my time between Xero at Shepeleff’s house and the mud and water in the excavation. There is Pripp, my dog, my only companion and he follows me like a shadow around the edges of the trenches. For he is not allowed to go down into the excavation, and he is very well-behaved. Sometimes he goes up to Vouni at night, but usually he comes with me to Xero. I share my lunch half-and-half with Pripp and he has even learned to eat oranges if they are peeled for him. Up to 3 at a time. Oranges as large as the head of an infant, 15-20 can be bought for 10 öre!