The Swedish Cyprus Archaeological Expedition was paying a visit to Paphos 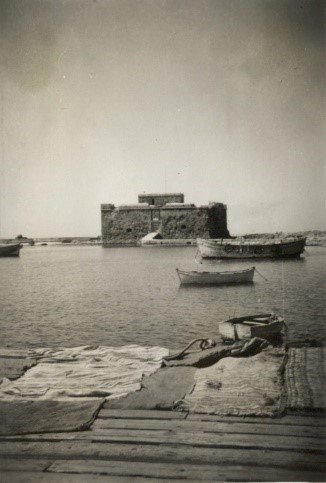 The Swedish Cyprus Archaeological Expedition was paying a visit to Paphos:

Early on Saturday morning we had breakfast and packed up our things. Ulla came along too of course. First, we drove to Polis and briefly visited Erikos and his dig.

I have already described the road earlier, now I at least got to sit at the wheel for the last 15 miles (English ones, of which there are 6 to one Swedish).  From Polis we shot directly into the Paphos district on an enchantingly beautiful road between enormous oak trees and olive trees.

The landscape was a vision, perhaps the most beautiful I have seen so far on Cyprus, Einar was light-hearted and serious, playful and beguiling as only he can be, and the Volvo swept ahead with a quiet, pleasant humming, and everything was just as it should be when a son travels off to send his mother of 60 years a greeting.

At last, we came up to a considerable height. There lay a little village at the edge of a 500-metre, nearly vertical cliff. Far below us, the heavenly Paphos plain spread out, and down there we saw the road lead along with the most enormous loops, from up here most resembling a big knotted tangle of thread in the lovely spring greenery. It was really best for Einar to be at the wheel here!

Once down on the plain, we sent the telegram home from Ktima and drove on down to the sea to see whatever remained of the ruins of old Paphos, where Aphrodite was born and where Paul once preached.