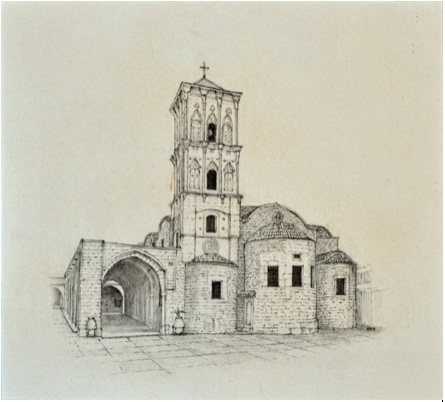 When we had crossed the hills, having travelled about six hours we reached Morpho. They told me this place was eight leagues from Nicosia, probably the city of Limenia might be situated here. We went to the magnificent convent of St Mama at this place, which appears to have been built on a very grand design. It consists of two courts, the buildings of which are unfinished; they are separated by a very magnificent church, built of hewn stone, and dedicated to St Mama, whose sepulchre they show in it. She is held in great veneration in Cyprus, and they have some legend concerning her riding on a lion, in which manner they always paint her. Though the building is not of modern architecture, yet it does not appear to be very antient. I conclude that it might have been built a little before the Venetians had possession of the island, being founded by some noble family of Cyprus. They have a water near which they say is miraculous.