The Rev. Daniel Clarke spent his last day on the island in Larnaca 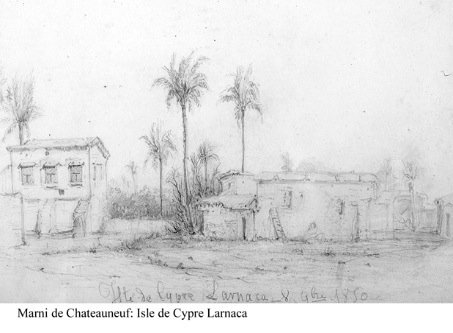 The Rev. Daniel Clarke spent his last day on the island in Larnaca:

In the morning, two hours before sunrise, we set out for Larnaca. And having to cross a bridge, found it shaking so violently with the impetuosity of the water, that we feared it would fall. The antient Cypriots pretended that their Paphian Altars, although exposed to the atmosphere, were never wetted by rain. Probably they would not have escaped drenching during the showers which had caused this inundation. We reached Larnaca at eight o’ clock and we were on board the Ceres before ten. Captain Russel’s fever had much increased. The apricots we brought for him seemed to afford a temporary refreshment to his parched lips and palate, but were ultimately rather injurious than salutary. The symptoms of his melancholy fate became daily more apparent, to the great grief of every individual of his crew.