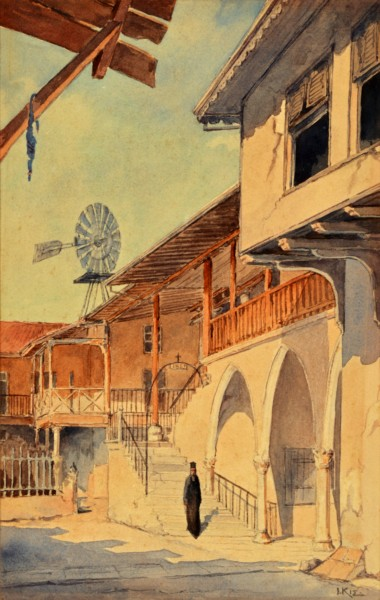 Having recovered a little, I sailed from Tripolis to Cyprus, hoping from there to catch a vessel to my intended destination. I arrived in Alikas and spent several days there, and then went to the capital city of Nicosia and went to the newly appointed archbishop Philotheos, to meet with him and to receive his blessing, as I earlier heard much from many about his virtue and wisdom. When I came and saw his gracious countenance, I was received with honor, and he detained me with a long conversation to learn who I was and where I had come from, and on finding out that I knew Latin, he started in various ways to try to persuade me to stay with him and to teach some students Latin grammar. He only knew a little of the Latin language himself and wanted to learn more from me, and tried to convince me through different means to shift to his palace. When I considered his benevolence and the love he showed for me, and thought about the approaching winter, recalling that I was in poor health and fearing that I could fall gravely ill, I yielded to his kind words and arrived at the court of the Archbishop of Cyprus, and took charge of the students entrusted to me for instruction in the Latin language and grammar. He honoured me and expressed his affection for me, and I dined at his table every day. I saw in him a man who was wise, benevolent, virtuous and well-spoken and one who was dedicated to teaching.