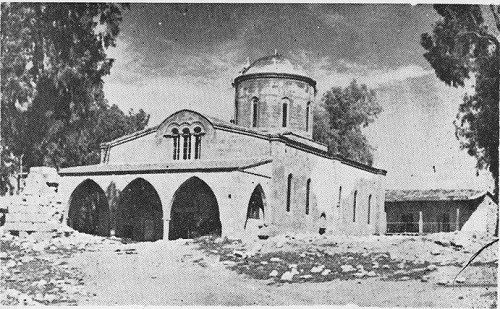 The pilgrim Bar’s kyj’s during his second visit in Cyprus visited the Monastery of Saint Mamas:

We paused in this monastery, as I have mentioned earlier, for a week and left on June 19 for the monastery of St. Mamas [ο Άγιος Μάμας του Μόρφου], which from the Kykko Monastery is located a day’s walk and even more. This monastery is situated on very level and healthy ground with a mountain on its eastern side, while on the western side, it is about a mile away from the coast. In its construction it is similar to a town, surrounded by four walls; the structures are low lying but expansive in length and breadth. There are two huge gates, like city gates, through which the largest carriage can pass. The buildings are made of large, finely-hewn stones, of a uniform size, which are white, smooth and attractive, and are similar to those used in the church of Saint Sophia in the town of Nicosia, of which I have spoken earlier. The church of the holy martyr Mamas is a very splendid construction, unlike any other church over which Christians now have possession, and surpasses in beauty any other church on Cyprus. It is of considerable height, length, and breadth, and on the inside is supported on ten large pillars. It is a church of three apses, as in the earlier mentioned monastery, but it is only in the central principal altar that the liturgy is celebrated. The floor is handsomely paved with stone slabs; it has about twenty or more windows and seven doors, of which five are large and the principal ones. Above, there is a single cupola with eight windows. The church is indeed very attractive and in it, on the right hand side wall, there is the icon of the holy martyr Mamas and a marble sarcophagus.