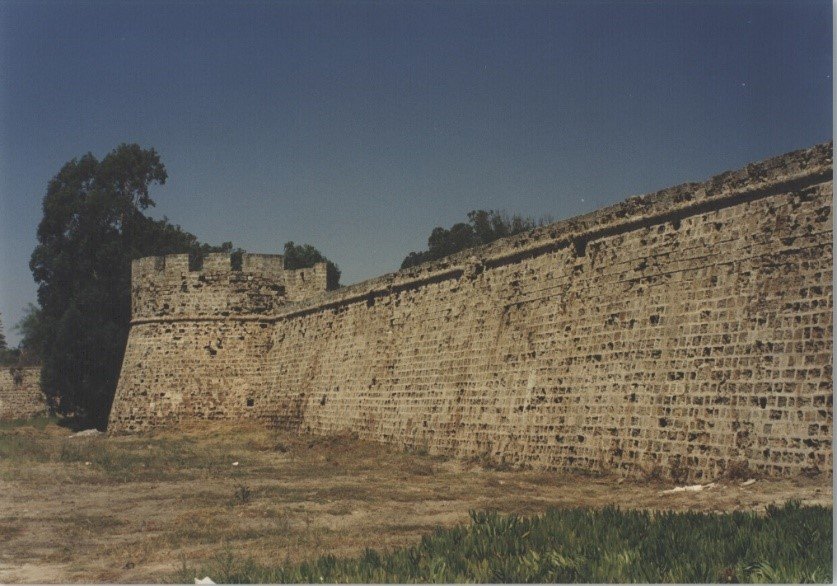 The Jewish merchant Elias of Pesaro on the lifestyle in Famagusta town:

Famagusta is situated on the sea shore, its area is quite flat. It is a fortified town, girt with a double wall, commanded by a fine large and solid castle. It is like Pesaro. The Government always keeps here five empty galleys to watch and guard the sea, as well as four captains living in the town, who have 800 Italian mercenaries under their orders. The townsfolk, who are thus exempt from all military service, are very well behaved and clean, careful to protect themselves from contagion, especially from the plague, which is common enough in the neighbouring parts of the Levant. Their precautions are very thorough, as in Italy, and no person arriving from an infected or suspected locality can enter the town before he has been detained forty days in the harbour. The houses are fine and well built, the roads well kept up. The products and merchandise of the country are sold in two places arranged as markets. Before the Royal Palace is a large and very pretty square, and at all the street comers are fountains of running water. The money current here is in all respects that of Venice. A scudo is worth 10 sold/i, a sequin 8 livres: a scudo other than Venetian, 6 Ivores and 8 soldi. People say that snow has never fallen here, and that there has never been frost. The amount of rain even is very small. On the other hand the heat is much greater here than in all the Turkish provinces. In summer no one leaves his house except for an hour in the morning, and an hour in the evening, and the summer lasts eight months. To go from one place to another one travels on horseback by night. Such is the custom of persons who wish to preserve their health. For the transport of goods and money they use great carts drawn by oxen. But the carts are not like ours, no more are the oxen, which are spotted and of many colours. One would think that the Patriarch Jacob had fed his herds here. One finds plenty of animals to ride, horses and donkeys. You hire a good horse for four livres a day; forage is cheap. Ophthalmia is very common here. It generally begins on the longest day of the year, and lasts beyond the autumnal equinox. It begins with a fever, which lasts two or three days, and violent headaches. Then the fever grows less, and a flux attacks the eyes with pain and inflammation, and lasts for twenty or thirty days. If one is observant and careful the affection disappears of itself. Men and women, adults and children, are equally liable to it. It must be a result of the heat, for at this moment in mid-October, we cannot bear a sheet, over us at night.