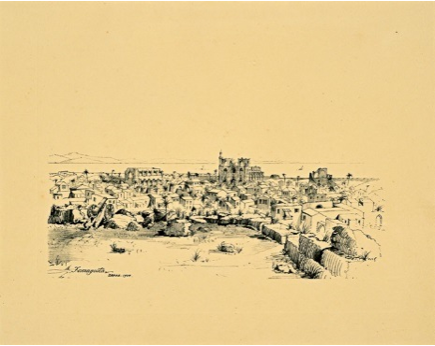 The 29 about two hours before day, we alighted at Famagusta, and after we were refreshed we went to see the town. This is a very faire strong holde, and the strongest and greatest in the Inland. The walls are faire and new, and strongly rampired with four principal bulwarkes, and between them turrions, responding one to another, these walls did the Venetians make. They have also on the haven side of it a Castle, and the haven is chained, the city has only two gates, to say, one for the land and another for the sea, they have in the town continually, be it  peace or warres, 800 soldiers and forty and six gunners, besides Captaines, petie Captaines, Governour and Generall. The land gate has always fifty soldiers, pikes and gunners with their harness, watching there at night and day. At the sea gate five and twenty, upon the walls every night do watch fifteen men in watch houses, for every watch house five men, and in the market place 30 soldiers continually.