The climax of King Peter’s madness came on this day 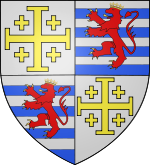 The climax of King Peter’s madness came on this day:

His son and heir, Prince Peter or Petrinos, happened to see two dogs belonging to James, the son of Henry of Giblet, Lord of Akaki and Viscount of Nicosia. The Crown Prince asked to have the dogs, but James loved them so much that he refused to give them up. His father Henry, politely and with respect, tried to explain to the King the love that his son had for these dogs, because they had grown up with him and he was very close to them. King Peter, furious at the audacity of Henry of Giblet and his son, threw Henry into prison and bound little James with chains and sent him to dig with the servants in the trench of the Tower of Margarita. This tower is supposed to have been on a height south-east of Nicosia, where the Ekali restaurant is today. King Peter dragged Maria, Henry of Giblet’s daughter, out of the monastery where she found refuge, and in order to humiliate her, wanted to marry her to somebody of low social class. When she refused, they handed her over to John of Nevil for torture. John never tortured the courteous and pretty Maria, because after the assassination of King Peter he married her.