The author Ch. Fürer from Nuremberg spent most of April in Cyprus 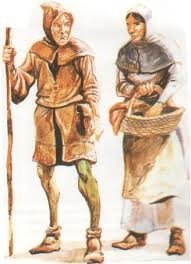 The author Ch. Fürer from Nuremberg spent most of April in Cyprus:

[Nicosia] is a city of some size and beauty, where lives an archbishop, whose annual income reaches the sum of 12,000 gold ducats, and most of the nobles of the island. One can make the circuit of the city in an hour and a quarter. In a monastery of the Franciscans the body of St Francis, a Burgundian knight, is shown in a wooden bier. There is another monastery of the same order, in which most of the kings of Cyprus are buried and right royal are their sepulchres. From the time of the kings of Cyprus many French nobles live here, who still preserve the French costume and enjoy many immunities and privileges. They keep their vassals, who are called Barici, in the state of slaves: some of them are born serfs, some are born free and sold later for certain duties only. A free woman who marries a slave bears slave children. In the Roman law it is different, for the offspring of a free mother and servile father is born free. A slave cannot marry a female slave of another master but the nobles themselves pair off their own serfs.