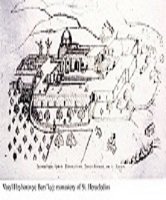 While we were at the convent of St. Heracleides, the Exarch was making his demands for the proceeds of the soil from those cultivating it. One man came in and told him that his oil came less than he hoped, and he wished the Exarch to take less than his share. The Exarch however was inexorable in as much as the man had consented to pay so much while the olives were yet on the trees, according to an estimate made by a disinterested judge.