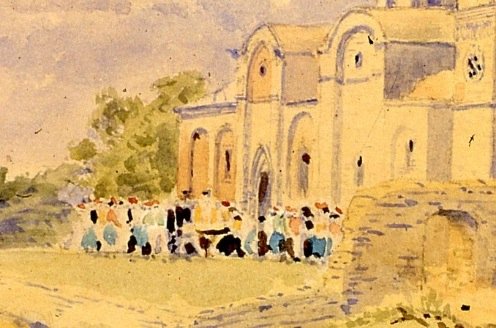 Having passed around the village we reached to the church where we arrived just after the mass was passing around for the adoration of the people. We entered and remained during the service. In one part of the church we saw a considerable amount of sacks containing eggs of the silk worm which were hatching….

Rizocarpasso is the last village at the east of the island. It is situated 15 miles from cape St Andrea…It is scattered over a considerable surface. On the west side and in a valley to the west are the parishes of Leco and Anabrysis and in the gardens of Rizocarpasson. In all there are about 200 houses and two churches and 8 priests. The people look healthy and stout and intelligent. They are certainly acute. They cultivate the mulberry in their gardens and plant about 400 trees in a stremma. They also cultivate cotton and wheat. They are evidently improving in their temporal condition.