Swedish archaeologist and art historian Ewart Wrangel was joined by George Jeffery, the British antiquarian on a trip to Stavrovouni, the mountain of The Holy Cross: 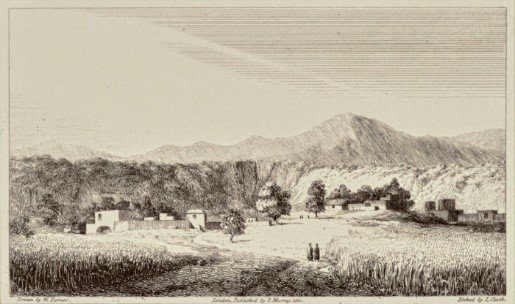 On 7th May we sat in a comfortable car – Mr Jeffery, postgraduate student Andres Stern, my escort on the Oriental travel, and myself – which followed a route south from Nicosia, the present capital of the island situated in the middle of the country, over the large, partially barren and desert-like plain, constituting the interior of the island. Soon we reached a hilly, more fertile landscape, and stopped first at Idalion, where once the famous temple of Aphrodite, the goddess of beauty, rose. Now-a-days you do not see much of the temple - or temples - on the once holy area. Already in the old days many clandestine digs were undertaken here, whence many an interesting objects found their way to European and American museums. How many sanctuaries both in the Orient and in the West have not been plundered in this way during the millennia. As far as the building themselves are concerned, their stone material has either, on the order of some ruler, been removed to another location where a palace or a sanctuary – to new gods – was to be erected, or the stones have been used by the local population for some profane purpose and then often before being carted away.