Spyridon Trikoupis gives a brief account of the events which involved Cyprus during the Greek Revolution: 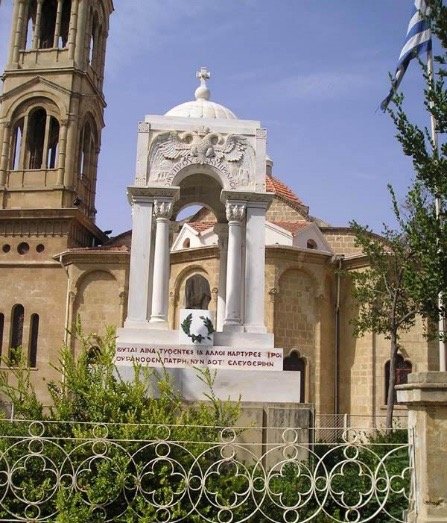 On May 3, 1821, four thousand soldiers arrived, and forthwith the Muteselim summoned to Levcosia the bishops and other notables under the pretext that as their fellow-Christians elsewhere had risen in arms it was necessary for their safety, as being loyal, to send a common memorial to the Porte, assuring the Sultan of their unshaken fidelity and attachment to his throne. He added that he would confirm their statements in reports of his own. Many believed him, and went to Levcosia. Some, more knowing that the rest suspected a trick and fled to Larnaca, a town of 6000 inhabitants mostly Christians, and were concealed in the consulates. Such of the notables of Larnaca and Lemesos as did not take the precaution of hiding themselves were arrested as they came out of the churches, and were sent bound to Levcosia. The Muteselim, having collected as many as he could in the capital, threw off the mask, and made his bloody purpose plain, although the unhappy Christians had given him no excuse.