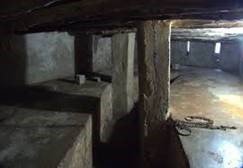 Sir A. Home the P.M.O. arrived. Health of troops at Larnaka very good but there is said to be a good deal of fever and probably heat apoplexy from keeping the men under bell tents which are next to no protection from the sun’s rays.  Mr. Palmer, who says he is ‘The Times’ correspondent, sent word to Foster of the ‘Daily News’ today to say that he has telegraphed to his employers stating that he had seen women slaves offered for sale in the public market here. I know this was untrue, but desired Baring to make every possible inquiry and sent Herbert nominally to enquire after the Archbishop’s health but in reality to find out from him if he had heard of this sale and to ask him to enquire into it. The Archbishop said he had heard nothing of it and did not believe a word of it as no slave had been sold openly in Cyprus for many years. Forbes told me that Palmer’s dragoman was hot with him when he imagined he saw these slaves and laughed hugely at the whole story.