The Seigneur de Villamont recounts his first impressions of Cyprus, a stop on his journey from Brittany to Jerusalem: 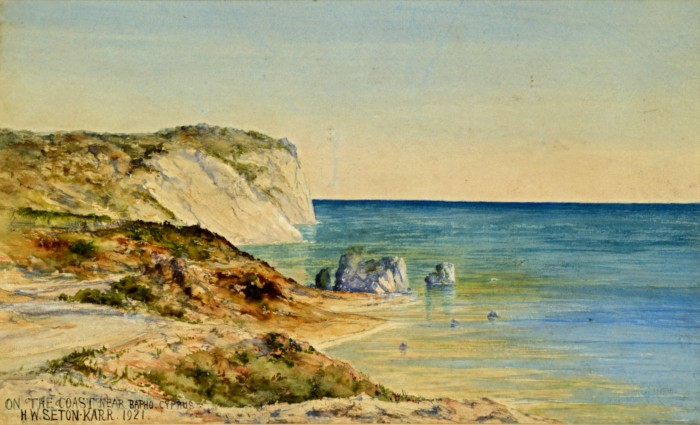 On Ascension Day, Thursday, May 11, 1589, about mid-day we arrived at the first point of the kingdom of Cyprus, which seamen call Cape S. Piphany, and coasting along came near to Baffo. This city is situated in a fair plain, close to the sea, and much set off to landwards by low hills. But it is half ruined, so that it profits little by the beauty of its site and the fruitfulness of the soil. There are found here in great quantity very beautiful stones called Bafo diamonds : some of them indeed are beautiful enough to deceive many a lapidary. The peasants put them aside and sell them very cheaply. The city of Baffo was anciently called Paphos, witness Holy Writ, where mention is made of the bonds with which S. Paul was bound before he went up to Jerusalem. In this city the goddess Venus held of old her court, for she was queen of the island of Cyprus, whence she is called Cypris, and the first temple dedicated to her was in this city, where men and women offered sacrifice to her naked ; but at the prayer of S. Barnabas the Apostle, a native of Cyprus, the idol of Venus and her temple fell shattered to the ground. A mile from Baffo we were shown the place where are the grottos in which the sleepers slept three hundred and more years without awaking, and many other fine things. But see, all is nearly uninhabited now on account of the unhealthy climate : so great are the changes and vicissitudes of things ! Anciently the place was the most delightful in the island, and the favourite abode of its kings.