Seigneur d'Anglure from Marne, France visited Cyprus and was received by the King and Queen 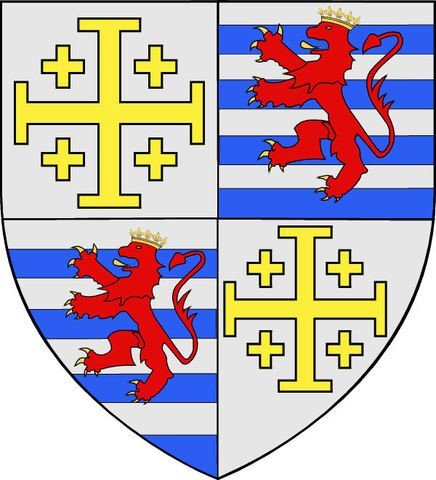 Seigneur d'Anglure from Marne, France visited Cyprus and was received by the King and Queen:

The following Sunday, the ninth day of January, the king sent us again presents, to wit one hundred partridges, sixty hares, and five wild sheep, a sight fair to see. He was a prince who greatly loved hunting. He had a little beast no bigger than a fox. It is called carable, and there is no wild animal but this little beast will catch it, especially the animals named above. For the rest the king made us right good cheer, and sent some of his finest coursers to bring us before him in his court. And when we came before him he received us very grandly. And when he had spoken with us for a space he sent to the Queen (Heloise de Brunswick) to bid her come to the hall. Then came the Queen to the hall, very nobly and royally attended, to wit by four of her sons and five of her daughters, and knights and lords and ladies and damsels, and she greeted us all very graciously. The Queen of Cyprus was very honourably adorned, and had a very rich and noble chaplet of gold and precious stones on her head. Her four sons were habited and adorned with goodly raiment. The five daughters were well arrayed, and each had a chaplet of gold and pearls and precious stones on her head. Then the Queen turned and saluted all the pilgrims as she left. After this the king led us to the fields to go hunting, and then we came back to our quarters to rest.