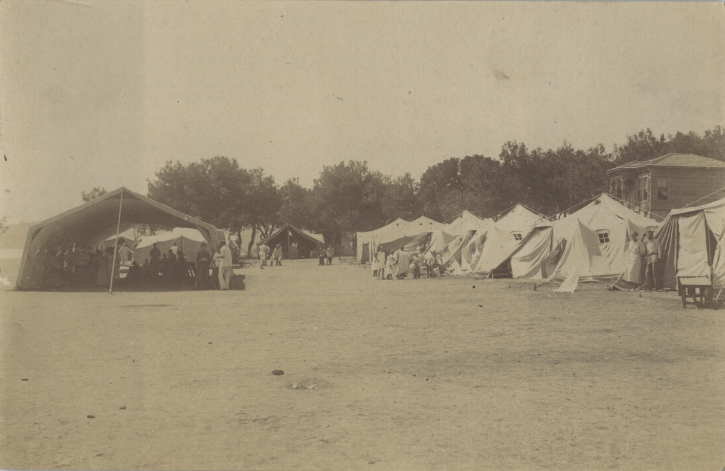 Rupert Gunnis was describing his encounter with a couple from Russia who were in Cyprus in the refugees camp:

Here on Cyprus there are many Russians who fled the Bolsheviks after the revolution(1). One of them by the name of Shepeleff(2) has been given one of the managerial positions in the big American mining company near Soli. He is married to a wife whose former husband was a Swedish baron Hierta in Russia. This gentleman is deceased now, but Mrs Shepperleff, who was a lady in waiting to the Tsar, has retained her Swedish orientation. She belongs to the very few educated people on Cyprus. On Sunday the family came up to Vouni and had tea in one of the palace rooms. They also have a Swedish-born adopted daughter with some Russian name I cannot recall. To honour the day we played Russian music on the gramophone. I was naturally invited to their home but I do not know when I will come down to Soli next time.  I have such a horror of that place.

(1) A group of White Russians were driven in 1920 by Bolsheviks to the Black Sea and defeated at Novorossisk. Two ships with 1,700 destitute refugees set off from there and having typhus on board, ended up in Famagusta. The British authorities kept them behind barbed wire to contain the disease. Some decided to stay in Cyprus while most of them moved on to Bulgaria where a haven was offered (Lavender, 1962, 187).

(2) Dimitri Shepeleff was employed at the mines in 1924. He was a worker in the czarist government. At the Black Sea he met a Red Cross worker whose husband and brother committed suicide rather than fall into the hands of the Bolsheviks. She and her elderly and ill father ended up in Cyprus where she married Shepeleff. She taught French at a Nicosia school and he was a translator until he was employed at the Skouriotissa mines in charge of the timekeepers and timber stores. He lived in an old granary and saw his wife in Nicosia on the weekends.