Rupert Gunnis, ADC to Sir Ronal Storrs, was up to his escapades as an archaeologist and noted in his diary 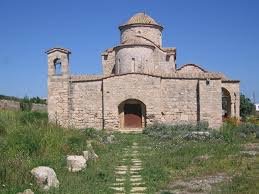 Rupert Gunnis, ADC to Sir Ronal Storrs, was up to his escapades as an archaeologist and noted in his diary:

Up early and with Mr Loizides, the local advocate, a helpful but talkative person to Lithrangomi looking at the charming church on the way dedicated to the B.V. M. and containing remains of a charming late mosaic in the apse. To a place called Kavalla where I found George, Tilliro and the workmen and opened a miserable Hellenistic tomb containing the usual white pottery. Tried several others but all opened. To see a temple site at Koma-tou-Yialou, might be good but has already been too dug over by villagers getting stones. However, collected a lot of pottery from the villages. Back to Lithrangomi and collected more vases. To Leonarisso and took two good “duck” vases from a Mr Haralambides. All this sounds like one of Hurcombe’s advertisements but as the pottery has been taken from the tombs and all their provenance unknown, it is much better the museum should have it than that the villagers should sell it to the local collectors.