On a cold Sunday, Edith Belcher went on a picnic 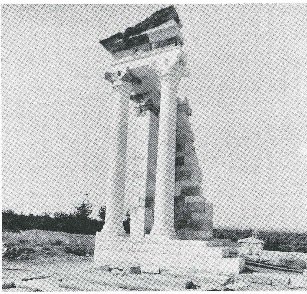 On a cold Sunday, Edith Belcher went on a picnic:

Drove to Limassol with a picnic and arrived at noon to pick up Tony. It was very cold and windy with little sun. Drove up to Apollo’s temple, a fascinating spot with still untold treasures buried – a beautiful spot, high up and overlooking the sea and Curium below. I am anxious to revisit the place on a heavenly day, which we have many of here. We then drove down to Curium and found a secluded pit where we could cook hamburgers and keep warm. Horribly cold. Quite a lot of people were roaming around. Ate and drunk-Toby gave me hell for forgetting brandy. We only had champagne and, by Apollo, we could have used some brandy that day! A guide there walked around with Toby- very interesting old man. He has worked with archaeologists for a long time and has interesting ideas regarding the land owned by the church and EFKAF. He told Toby that it was not right; that the land should belong to the people of Cyprus and not to the two religious groups of the island. I sat and watched the countless herds of sheep pass by with new lambs and listened to the young Turkish shepherd sing his weird and whining Turkish songs while he cavorted around like one of the young lambs. He seemed slightly ad, but perhaps the wind affected him like it does a horse.