Nicolai de Marthono, a notary of Carinola, arrived in Famagusta 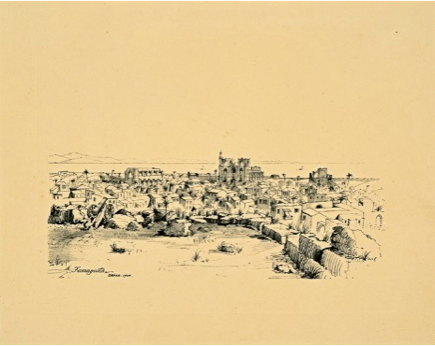 Nicolai de Marthono, a notary of Carinola, arrived in Famagusta:

Famagusta belonged formerly to the king of Cyprus, and is situated in the kingdom of Cyprus. Cyprus is a good island, with a circuit of 500 miles. But now the Genoese hold the said town. The city of Famagusta is large, as large I reckon as the city of Capua, and has fine squares, and houses very much like those of Capua, but a great part, almost a third, is uninhabited and the houses are destroyed, and this has been done since the days of Genoese lordship. The said city has finer walls that I have ever seen in any town, high with broad alleys around them, and many and high towers all around. This city is jealously guarded day and night by the Genoese through fear of the king of Cyprus. There are seven hundred armed soldiers in the pay of the Genoese who guard that city with great punctuality. Between that church of St Nicolas and the palace where now dwells the Commandant, which formerly belonged to the king of Cyprus when he ruled in that city – a fine palace with a fore-court, many buildings and a fair garden- is a court larger than that of Capua, in which are sold bread, a great quantity of vegetables and other fruit, just as at Capua. And daily there are sold there cloths and many other things at auction. The court is, I think, in the middle of the city.