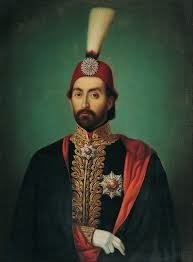 The new governor made a law that thieves who steal sheep etc. not under lock and key, shall have a wooden block nailed to their leg and a chain and thus for three months be the common scavengers of Lefcosia. If however they commit burglary, they shall be punished in the same manner for a whole year. One man was recently punished for an offence in Lefcosia by having a ring put through the grissle of his nose and being led through the streets by a constable, who occasionally gave him a jerk with a string to remind him of his condition.